Symtech Racing and Paddon ready for asphalt roads in Spain 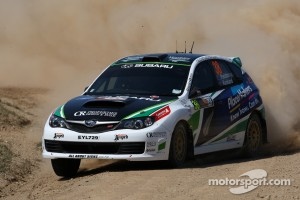 The 2011 FIA Production World Rally Championship will resume this weekend at Salou in Spain with Symtech Racing driver Hayden Paddon ready to enjoy the challenge of the penultimate round: the Rally of Spain. The New Zealander and Symtech Racing have already put the title beyond the reach of their rivals since Australia by clinching the crown in their Subaru Impreza that is prepared and run by the Belgian team.

Co-driven by John Kennard, Hayden Paddon managed to secure the PWRC championship thanks to four dominant victories achieved on the four rounds he has contested this season, becoming the first New Zealander ever to win a FIA title. In Spain the Symtech Racing crew will have to face a new challenge, as it will be the first time they compete on asphalt roads at the wheel of their Subaru Impreza STR11. The Paddon-Kennard duo will start the event committed to winning the rally, although the pressure will be certainly less compared to the previous rounds since the title is already in their hands. To achieve this ambitious result they will be aiming for a clear run, without leaving anything to chance. In addition, Symtech Racing organised a two-day test in Belgium last week, followed by an additional session on Monday, this time in Spain.

Hayden Paddon commented: "It's been a fantastic season so far. During each round, Symtech Racing has provided us with a perfect car and the team personnel has always risen to the occasion, doing a great job. For the Rally of Spain I will have to rely on the team's experience as I'm not an expert on asphalt roads, so I will let them propose how to best adjust the set-up for the event. This will only be the third asphalt rally of my career: I have a very good feeling with the car so I'm looking forward to it."

Wim De Boeck commented: "It will be interesting to see how Hayden will cope with running on asphalt roads. However, I believe we have found a good set-up for the car, which will certainly help him find the right confidence during the rally. The set-up was fine-tuned during the tests we did last week in Belgium together with Reiger, which was very successful. The test we carried out in Spain on Monday has confirmed the positive impressions we already gathered, so Hayden is very satisfied with the results so far."

Based in the seaside resort of Salou, the Rally of Spain will take place in the Costa Daurada region, south of Barcelona. It is the only true mixed surface round on this year's World Rally Championship with one day taking place mostly on gravel (85%) and two days run on asphalt. The rally will start on Friday October 21 at 07:00 and will end on Sunday October 23 around 14:15.