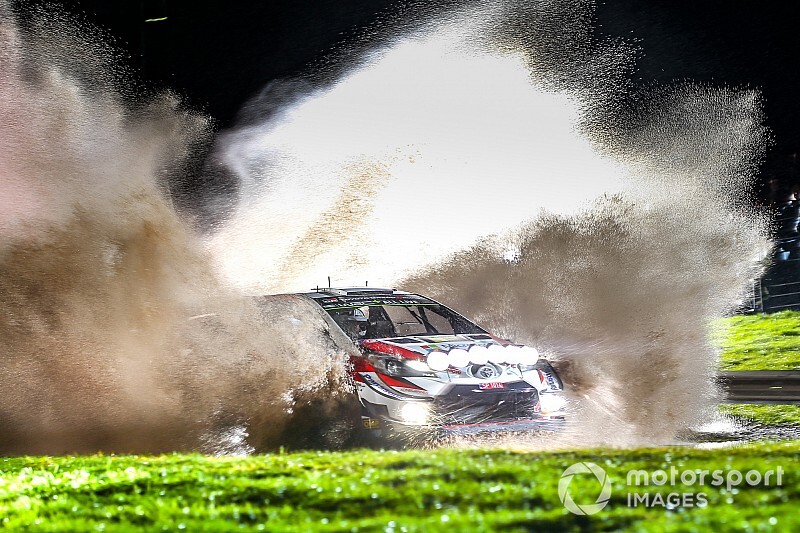 Ott Tanak stormed into the lead of Wales Rally GB on the pair of Friday night stages, leaping from fourth to first while erstwhile leader and Toyota teammate Kris Meeke went backwards.

Tanak benefitted from running first on the road for Dyfnant, winning the stage by 5.7s from Hyundai’s Andreas Mikkelsen in near-daylight conditions. Luck was also on Tanak’s side as damaged wires meant his lights weren’t working on Dyfnant, requiring roadside repairs to get them restored for the fully-dark Aberhirnant test, which he also won.

Reigning champion Sebastien Ogier went third quickest on both evening stages to cement his second place, despite dropping behind the charging Tanak. Ogier was down to third after going 5.8s slower than Tanak on Dyfnant but quickly retook the position from Meeke by 0.2s, who complained of aquaplaning causing a “big slide” on Aberhirnant.

Thierry Neuville conceded time to both his championship rivals in the night, the Hyundai man suggesting Tanak had benefitted from lighter conditions as he struggled to constantly adjust his lights on Dyfnant. Four seconds were lost to Ogier and a few tenths were also lost to Meeke across the pair of day-ending tests, leaving him 4.8s behind Meeke.

Due to a 20-minute delay to the night-time loop’s pair of stages – caused by an earlier stoppage on the re-run of Penmancho due to Jari-Matti Latvala’s crash – Dyfnant quickly descended towards darkness for WRC runners further down the order.

As last WRC car on the road, Craig Breen suffered most, the only driver aside from M-Sport’s third driver Pontus Tidemand to clock a time over 10s slower than Tanak on Dyfnant.

That allowed Breen’s Hyundai team-mate Mikkelsen to take fifth and put him within range of seventh-placed Teemu Suninen, though he gained a few tenths on Suninen on Aberhirnant to end Friday 3.9s ahead in sixth.

Eighth-placed Elfyn Evans, who had lost over 40 seconds this morning with suspension damage, cut four seconds out of Suninen’s advantage, while Tidemand ensured M-Sport finished the day with their cars in formation by moving into ninth.

Those positions had been gifted to him through misfortunes for the leading WRC2 Pro contenders, however, as Kalle Rovanpera lost over a minute with a puncture on Dyfnant and Gus Greensmith retired before the same stage with a technical issue.