One of the legends of rallying, Hannu Mikkola, best known for winning for Ford and Audi, passed away on Friday. He was 78.

Seven of Mikkola’s triumphs came in the famously daunting and fast 1000 Lakes rally in his Finnish homeland (although not all counted toward his tally of 18 as they weren't always accorded WRC status). But Hannu also knew how to nurse a car in the endurance events: his final triumph came in the Safari Rally of 1987 at the wheel of one of the more unlikely rally cars, the Audi 200 Quattro.

Although, like many Scandinavian greats, his career started in a Volvo – a PV544 – by the 1970s he was more closely associated with Ford, clinching the 1972 East African Safari Rally (not a WRC event) in an Escort RS.

His first World Championship-status win came in the 1000 Lakes in 1974 in another Escort, in ’75 he triumphed in Morocco – partnered by current FIA president Jean Todt – in a Peugeot 504, before winning the 1000 Lakes again at the wheel of a Toyota Corolla.

He continued with his eponymous team running Toyotas and Peugeots, until he was signed as a works Ford driver in 1978. Armed with a MkII Escort RS1800, he won Rally GB (then called the RAC Rally) and took two more podiums to finish third in the points race, with Arne Hertz now established as his co-driver. 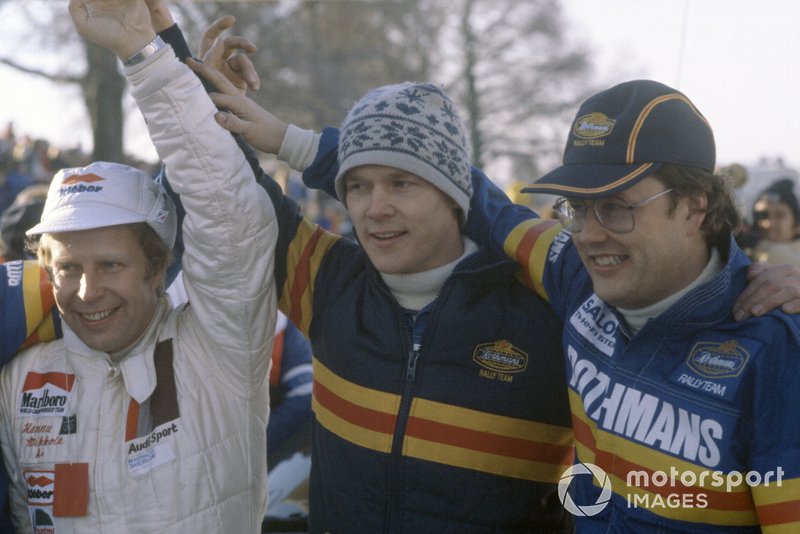 There were four wins in 1979 but he fell one point short of beating Bjorn Waldegard to the first WRC title for Drivers. He also won plaudits for steering another unlikely rally car – the Mercedes 450SLC – to second in the Safari, and he’d use this car to score two more podiums in 1980. Elsewhere he was usually to be found in a Ford, although a Porsche 911 was his car of choice in the Monte Carlo, and he used a Toyota Celica in Finland. Again he finished as runner-up in the points race.

Helping Audi develop the then-groundbreaking Audi Quattro saw him clock up four wins across 1981 and ’82, but it was the four he clinched – along with three runner-up finishes – in ’83 that clinched the title for him, despite four retirements. 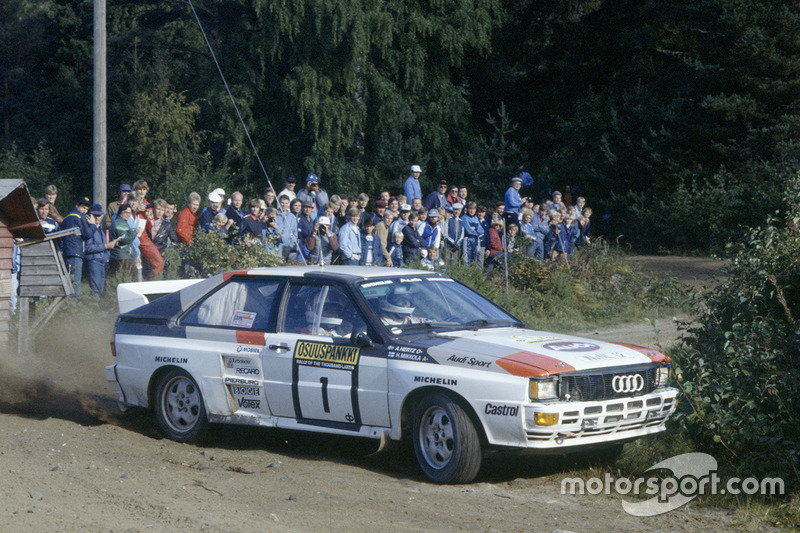 Hannu Mikkola, Arne Hertz, Audi Quattro on their way to 1000 Lakes victory in 1983, the year they clinched the championship.

The following year, one win and seven other podiums resulted in yet another runner-up finish in the points race.

The arrival of smaller, more nimble all-wheel drive Group B cars had made life tough for Audi’s AWD ‘pioneers’, and Mikkola was no longer being used for a full season by the Ingolstadt marque, which made its twitchy short-wheelbase version of the Quattro a tough beast to learn for Hannu who was by now in his mid-40s.

Following Group B's demise mid-1986, Mikkola found himself at the wheel of the large 200 quattro in Group A. That final win in the Safari in ’87 – followed by a third place in the Acropolis – would mark the final top-three WRC finishes for Mikkola, although he’d spend four seasons with the disappointing Mazda 323s.

Indy 500: Why does the winner drink milk? A tradition explained