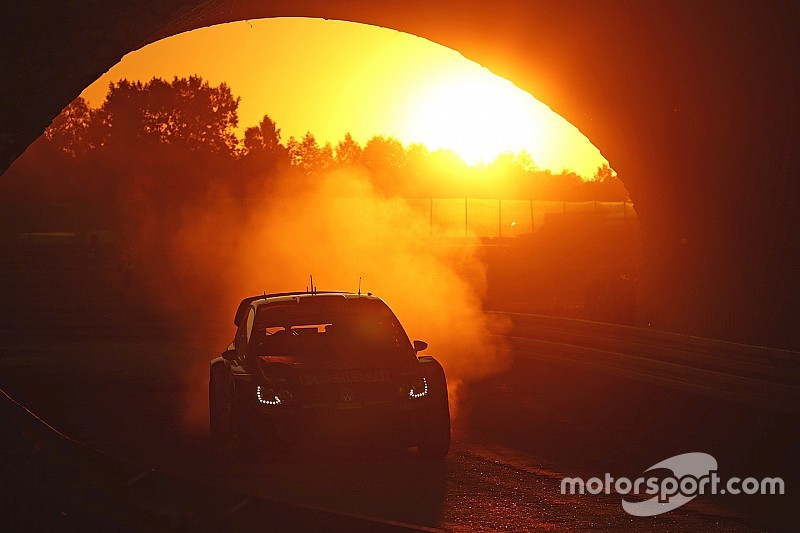 Sebastien Ogier defied the disadvantage of running first on the road to lead Rally Poland after the first day of proper stages, overhauling the star of the morning Ott Tanak.

After Ogier had won Thursday night’s superspecial, his VW teammate Andreas Mikkelsen set the pace on the opening true gravel stage of the event, but was quickly toppled by Tanak’s pace in his M-Sport Fiesta.

Tanak benefited from his running order position, helped by 10 cars ahead of him sweeping the gravel roads, and he pulled out a 9.3s lead over the morning’s stages.

Mikkelsen held second, ahead of Ogier – who runs first on the road – and the third Polo of Jari-Matti Latvala.

Kris Meeke’s Citroen and the Hyundai of Sardinia star Hayden Paddon were next up, with local hero Robert Kubica running on the fringes of the top six.

On the repeat loop in the afternoon, the stages were much cleaner for Ogier.

Despite gambling on the softer tyres, which he admitted later was a mistake, he recouped all the time he’d previous lost – and then some.

Ogier was helped by Mikkelsen going off on SS6, gaining 4s on him straight away. He leads the Norwegian by 2.1s overnight.

Tanak’s morning of glory turned into an afternoon of misery, as he couldn’t cope with his soft-tyre choice, so he haemorrhaged time to his rivals – not helped by a brake problem too.

The Estonian lost 17s on SS7 alone, dropping from first to third, and his Fiesta showed signs of an off: "No brakes, no tyres, what do you expect? I don't know how we can mess up our tyre choices so often. Not nice."

Latvala took third from Tanak – whose tyres were worn to the canvas by the end of the day – with the fastest time on the penultimate stage. The Finn is almost 11s behind Mikkelsen going into Day 2.

Paddon lies fifth ahead of Kubica, who benefited from hard-compound tyres in the afternoon and moved his way up the order.

Meeke dropped back to eighth, behind Hyundai’s Thierry Neuville, after going off into a field on SS8.