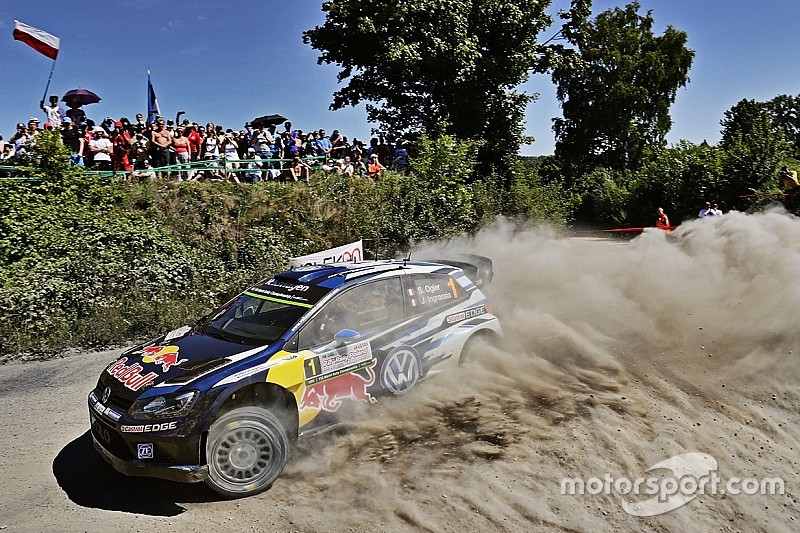 Sebastien Ogier extended his lead on Rally Poland, despite his less-than-ideal position in the running order, by making a strong attack on the morning of Day 2 and then maintaining his advantage despite another risky tyre choice.

Volkswagen ace Ogier made a statement of intent with the fastest time on the 17km Mazury opener, before M-Sport’s Ott Tanak won the next two stages in his Ford Fiesta, and Ogier won the morning’s closer.

It meant Ogier extended his lead over VW teammate Andreas Mikkelsen to 7.2s, and Tanak overtook Jari-Matti Latvala for third by just a tenth of a second, 20s off Ogier’s lead.

Mikkelsen attacks in the afternoon

In the afternoon stages, Ogier again went for soft tyres – even though he’d thought it was an error yesterday – with Mikkelsen opting for hards. After SS14 was cancelled, Mikkelsen topped SS15, and rued the cancellation as he’d wanted today's stage mileage to be as long as possible.

Mikkelsen admitted to taking some big risks on SS16, but complained: "So much dust, I couldn't see, so difficult. I really pushed to the maximum, and took some risks because I couldn't see anything. I think that was our chance."

Ogier ended the day content, albeit with his lead trimmed to 5.6s over Mikkelsen, but set the fastest time on the day-closing superspecial stage.

"I'm really pleased with my rally so far," said Ogier. "Leading the rally from my position of first on the road is very satisfying. The fight is close and I'm ready to continue it tomorrow."

Tanak once again overcame Latvala for third on the final proper stage of the day with another fastest time, after Latvala had repassed him on SS15. Tanak extended his advantage over Latvala on the superspecial too.

Paddon remains in a solid fifth in his Hyundai, ahead of Neuville, Kubica and Kris Meeke in the best of the Citroens.