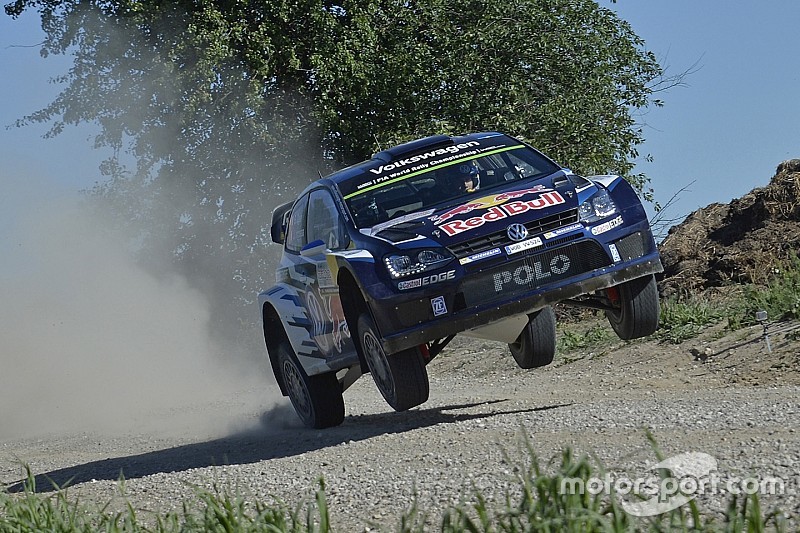 Two-time champion Sebastien Ogier scored his fifth victory of the season on Rally Poland to extend his lead in this year’s World Rally Championship.

Volkswagen ace Ogier ended any hopes that teammate Andreas Mikkelsen might have harboured of victory by beating him by 2.5s on the first run through the Baranowo stage on Sunday.

On the re-run, which formed the powerstage, Ogier beat Ford's Ott Tanak by 0.1s to take maximum points.

“We’ve had so many great wins, doing 90 percent of the rally first on the road, it’s a great victory,” said Ogier. “We had to push from the first minute to the last.”

Mikkelsen cruised through to finish second, 11.9s behind Ogier overall.

Jari-Matti Latvala’s efforts to wrest third place from Tanak ended when he slid his VW Polo into a tree on the final stage, which smashed the front-right corner of the car and broke the radiator: “I got a bit fast in and hit a tree.”

Tanak finished third, pushing hard in the final stage as he didn’t know Latvala had been off.

Latvala’s car took time to restart, and although he made it back to the finish he incurred time penalties that dropped him to fifth.

Hayden Paddon inherited fourth for Hyundai after another strong performance.

Thierry Neuville rolled his Hyundai on the opening stage of the day, but continued with a fencepost sticking out the back of his car. He finished sixth.

There was late drama on the powerstage for local hero Robert Kubica, who suffered a right-rear puncture that cost him 16s and a position to Kris Meeke’s Citroen.

“Apart from that, it was a good rally for us,” said Kubica.