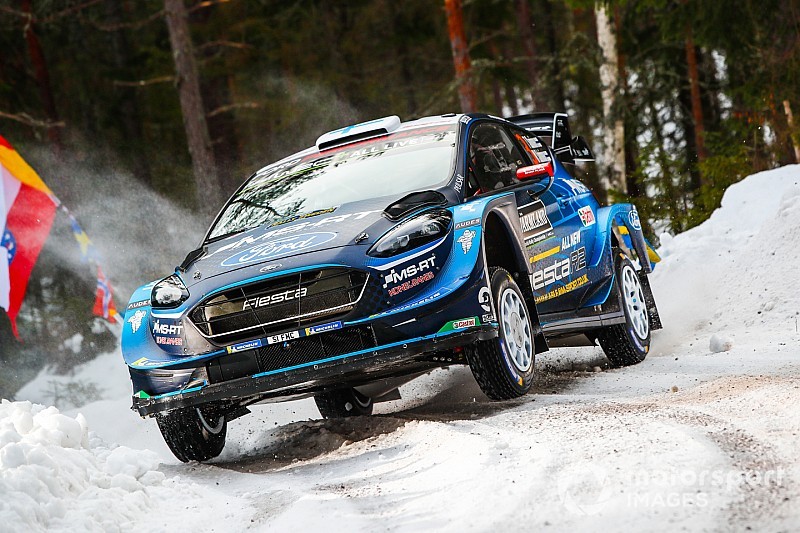 Both M-Sport's Suninen and Toyota driver Latvala had risen quickly through the order this morning and continued their progress up the leaderboard, immediately moving to second and first place respectively after Hof-Finnskog’s afternoon rerun.

Suninen then moved into first with a fastest time on the subsequent Svullrya test, with previous leader Ott Tanak dropping further adrift in third place.

Trouble befell both leading drivers on the final short Torsby test, however, with Latvala running wide over a crest and becoming stuck in a snowbank which cost him nearly 24 minutes.

Toyota elected to retire Latvala's car for a return under Rally2 regulations on Saturday, effectively reducing that time loss to only seven minutes.

Suninen meanwhile had his lightpod, necessary for driving through Torsby’s twilight conditions, partially detach from his Ford Fiesta, obscuring the view from his windscreen and costing him 11 seconds to Tanak.

The gap between Suninen and Tanak subsequently shrank to only 2s heading to overnight service.

Third-placed Andreas Mikkelsen (Hyundai) was one of the primary beneficiaries, one of the few drivers not to suffer some sort of drama in the afternoon.

Elfyn Evans (M-Sport Ford) had suffered a spin on stage two, the morning pass of Hof-Finnskog, but won two of the afternoon’s four stages to climb up to fourth place.

He moved up partially at the expense of Sebastien Ogier and Thierry Neuville. Ogier ran wide on Svullrya, clipping a snowbank that dragged him in nose-first and left him stranded and forced him to retire.

Ogier’s Citroen teammate Lappi was one of the beneficiaries, who turned in a dominant performance on the final Torsby test that promoted him from ninth to fifth.

Sebastien Loeb (Hyundai) had struggled to acclimatise to Sweden’s roads on his return to the snow after six years away. His pace improved in the afternoon, setting top five stage times regularly and moving up to sixth. He had been as low as 10th during the day.

Neuville became first driver on the road after Ogier’s retirement and struggled, complaining that the lack of snow on stages had turned it into a gravel rally.

He had already spun twice Hof-Finnskog, once at speed when the rear kicked out and touched a snowbank, and another when he slid wide at a junction. He finished the day seventh, with a slim 0.4s advantage over Kris Meeke (Toyota) in eighth.

M-Sport’s third driver Pontus Tidemand, who struggled with a throttle sensor issue this morning, improved his pace somewhat in the afternoon but remains a distant ninth, with WRC2 leader Ole Christian Veiby completing the top 10 in a privateer Volkswagen Polo GTI.