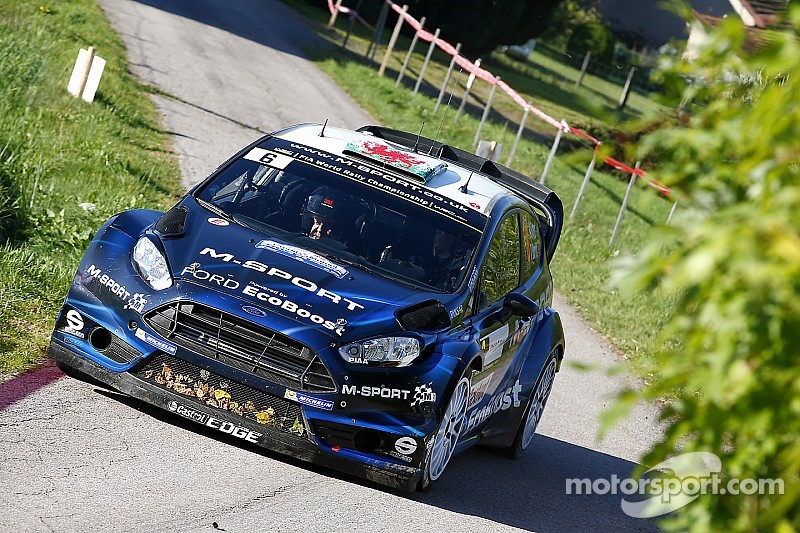 The Welshman was running in a strong fourth place...

M-Sport World Rally Team’s Elfyn Evans looked on course to deliver his best ever performance behind the wheel of the Ford Fiesta RS WRC today. The Welshman was running in a strong fourth place during the opening phases of Rallye de France – Alsace and was in contention to challenge for the podium before an electrical issue put paid to his efforts.

Battling on, Evans climbed back into a points paying position with Mikko Hirvonen flying the M-Sport flag in the intense battle for fourth place. The Finn is currently sixth overall, just one second adrift of his closest rival.

It was obviously really disappointing what happened this morning as we were going really well...

After the first three stages, Evans was proving that his impressive performance at last month’s Rallye Deutschland would not be a one off. He may not have had the perfect set-up for the morning loop, but the times came naturally to the young Welshman. Unfortunately however, his hard work and progression was to go unrewarded.

Having noticed a warning light at the end of SS3, Evans knew that getting his Fiesta RS WRC back to service would require all of his determination and good fortune. Despite the team’s best efforts, the electronics failed within sight of the regroup and he and co-driver Daniel Barritt had no option but to push their Fiesta the remaining distance.

It was a huge effort from the pairing which kept them in the rally, but having checked in to the time control 10 minutes late, they incurred a one minute and forty second penalty.

Regardless of his misfortune, Evans can take encouragement from the impressive pace he has shown today. Taking another step forward in his development, he climbed to 10th position overall and will now concentrate on clawing back as many points as possible for M-Sport’s championship campaign.

In the sister M-Sport Fiesta RS WRC, Hirvonen struggled to get to grips with Michelin’s new compounds over the morning loop, but having made some set-up changes in service he and co-driver Jarmo Lehtinen were able to up their pace considerably.

Setting a string of competitive stage times, the Finns climbed to sixth place overall and are within touching distance of a strong finish having had the better of their nearest rivals throughout the afternoon.

Mikko Hirvonen (6th) said: “This afternoon was a lot better than this morning. We made some changes to the car and the more mileage we did with the tyres, the better it got and the better we understood how to use them in these conditions.

“It was a lot better and I was happy. Now I’m more on the pace that I was looking for. I’m catching the boys in front and can hopefully challenge for fourth place and some good points over the next couple of days."

Elfyn Evans (10th) said: “It was obviously really disappointing what happened this morning as we were going really well, but these things happen and you just have to pick yourself up and get on with what you came here to do.

“We gained a lot of knowledge today about the tyres and how the car works on the characteristics of this event. I think that our pace has been good, so now we just need to concentrate on that – keep progressing, keep learning and keep improving the pace as the weekend goes on.”

Team Principal, Malcolm Wilson OBE, said: “We’ve seen some great pace from Elfyn [Evans] today with some fastest sector times which is really encouraging. It was a shame that we had an issue with the alternator, but he hasn’t let it affect him and he’s continued to display good speed.

“Mikko [Hirvonen] found the best set-up for the new tyres this afternoon and he is now in the battle for fourth. Knowing Mikko, he won’t give up on that position without a fight!”

Dennis Kuipers (12th) said: “It’s been a good afternoon for us with no problems and no dramas. The pace up front is really quick so to push hard is not so easy. But we’re getting more confidence with each new kilometre and the rhythm is getting better all the time. Let’s see what happens tomorrow when I hope we can continue like that.”

Yuriy Protasov (14th) said: “We made some changes to the pacenotes in service and everything was a lot better this afternoon. Ott [Tanak] and Kuldar [Sikk] did a really good job as our safety crew and they helped us a lot with the pacenotes.

“This car is amazing to drive, but it is so different to what I am used to so it is going to take a little getting used to. I’m getting a better feeling all the time. I’m happy to be here and I was happy with our improvement this afternoon.”

Pontus Tidemand (Rally 2) said: “Everything was going to plan this morning and I was pleased with our performance, but unfortunately it didn’t quite go to plan this afternoon. There are some bollards on the stages to stop the drivers from cutting and on SS5 one of these was on the middle of the road. We hit it, the car lifted, and we went off.

“There was nothing we could do, but this is rallying and sometimes you have to take the good with the bad. I was pleased with our pace so tomorrow we just need to come back and continue as we were this morning. This is rally, and sometimes it happens.”

“Pontus [Tidemand] too was showing some really good pace. I think he was very unlucky. He hit one of the bollards that had been pulled onto the road but I have no doubt that he’ll be straight back on the pace when he re-joins tomorrow.”

Solid start for Kubica in France