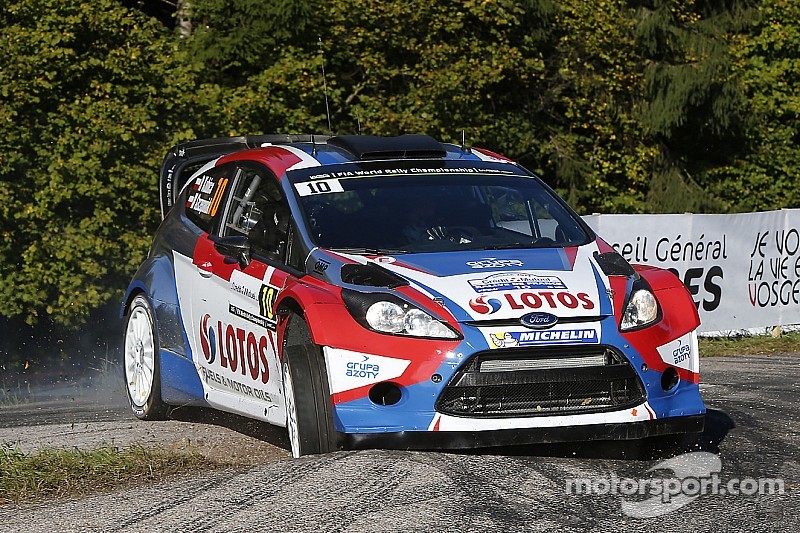 Robert Kubica climbed from seventh to fifth in the overall standings.

RK M-Sport World Rally Team’s Robert Kubica came into his own as Rallye de France - Alsace embarked on the second day of competition. Showing his class behind the wheel of his Ford Fiesta RS WRC, the Pole set a string of consistent and competitive stage times that saw him climb from seventh to fifth in the overall standings.

Getting to grips with Michelin’s new compound tyres and the handling of his Fiesta on the Alsatian asphalt, Robert was able to up his pace significantly. Driving well on a risk-free strategy, the Pole produced what has arguably been one of his best performances of the year.

Renowned as a Tarmac specialist, the Formula One race winner combined his extensive knowledge with a highly intelligent approach. Fully aware of the challenges and pitfalls connected with this tricky event, he and co-driver Maciek Szczepaniak adopted a near-perfect strategy by gradually building their pace as the weekend went on.

Their strategy paid dividends and Robert and Maciek are just 0.9 seconds adrift of a career-best four position going into tomorrow’s final day.

Robert Kubica (5th) said: “I think we’ve had a good day and we’ve been driving well. Ever since the second loop yesterday I think that we have shown some good pace. There are of course still things to improve, but I think that is the same for most people on this event and that we can be satisfied with the job we have done today.

“I drove my own rally and will do the same tomorrow. For me, I think the most important thing is to have fun, enjoy the driving and gain the experience.”

Team Principal, Malcolm Wilson OBE, said: “I believe that this has been Robert’s [Kubica] best performance in a world rally car to date and it is great to see his performance growing with each new stage. He’s done a great job to reduce the gap to Dani [Sordo] and is now just 0.9 seconds adrift of fourth place which bodes well for an exciting battle between the two of them tomorrow.”