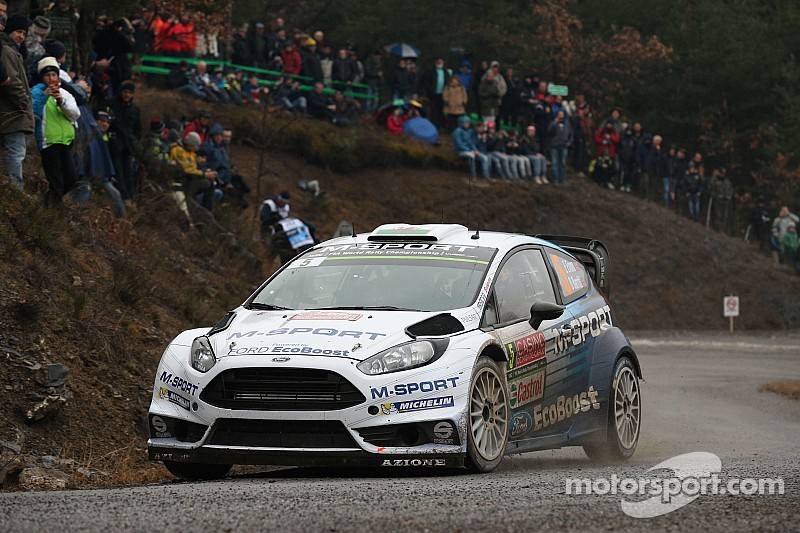 The M-Sport pair end the day in fourth and sixth places.

M-Sport World Rally Team’s Ott Tänak and Elfyn Evans got off to a flying start on the first full day of competition at Rallye Monte-Carlo today. Coupling flashes of potential with a composed drive behind the wheel of their EcoBoost powered Ford Fiesta RS WRCs, the pairing end the day in fourth and sixth places respectively.

It was a great start for M-Sport’s young team. Despite their inexperience, the pairing capitalised on the experience in the team around them. Having the necessary speed and composure to progress, each proved capable of top-three stage times and were running as high as third and fourth overall.

Making their mark on their full-time return to the FIA World Rally Championship, Tänak and co-driver Raigo Mõlder posted the second fastest time through yesterday’s opening speed test (SS1); and carried that momentum with them into this morning’s loop of stages.

It’s been a terrific start for the two youngsters.

As the conditions became trickier to decipher during the second pass, the Estonian refused to be pulled into any unnecessary battles – his focus firmly fixed on his own event. Thoroughly enjoying his return to M-Sport’s top-specification Fiesta, Tänak’s blend of speed and consistency sees him on course to secure his best Monte-Carlo result.

Evans too was proving his worth – the Welshman posting the third fastest time through the first pass of ‘La Salle en Beaumont – Corps’ (SS3). Analysing all of the information from their trusted ice note crew, he and co-driver Daniel Barritt held their own throughout the morning and looked on course to make further gains throughout the afternoon.

Unfortunately for the Welshman, the unpredictable conditions saw him somewhat hindered over the second pass. Suffering a spin on SS6 he was unable to capitalise on his studded tyres, and found himself at a disadvantage as the conditions bettered for the final speed tests [SS7 and SS8].

As one of the championship’s most determined youngsters, he didn’t let the time loss affect his motivation. Whereas others faltered in the treacherous conditions, Evans kept his Fiesta RS WRC firmly planted to the road which keeps him in contention for a strong result.

Ott Tänak (4th) said: “It has been a very tricky day. The first pass was really icy and foggy and I was surprised to see that the conditions weren’t much better in the afternoon. It was a little better for the last two stages [SS7 and SS8], but still I think we can say that this is a proper Rally Monte-Carlo!

“I think we’ve had a really good day. We’re not the fastest in the stages, but we’re keeping a good rhythm and focusing on our own rally which I think is what’s important here. As we saw this afternoon anything can still happen. We just need to remain calm and focused on ourselves for the next two days.”

Elfyn Evans (6th) said: “The first two stages this morning [SS3 and SS4] were very promising and I was really happy with our pace. But if I’m honest this afternoon was a bit frustrating. On the first stage [SS6] – where we had the right tyres – I made a clumsy mistake; and then we just didn’t have the [tyre] package in the car for what we needed on the second two [SS7 and SS8].

“It’s been a testing afternoon, and as we saw on the last stage [SS8] anything can happen. There is still a long way to go, but at the same time, you always want to do the best you can.”

Team Principal, Malcolm Wilson OBE, said: “It’s been a terrific start for the two youngsters. We certainly didn’t expect to be in this sort of position at the end of day two but both Ott [Tänak] and Elfyn [Evans] have driven well and are in really strong positions because of that.

“It’s going to be very tricky over the next two days, but I think that the way they coped with the difficult conditions today showed a maturity way beyond their level of experience. Let’s hope that they can continue at a similar pace tomorrow.”