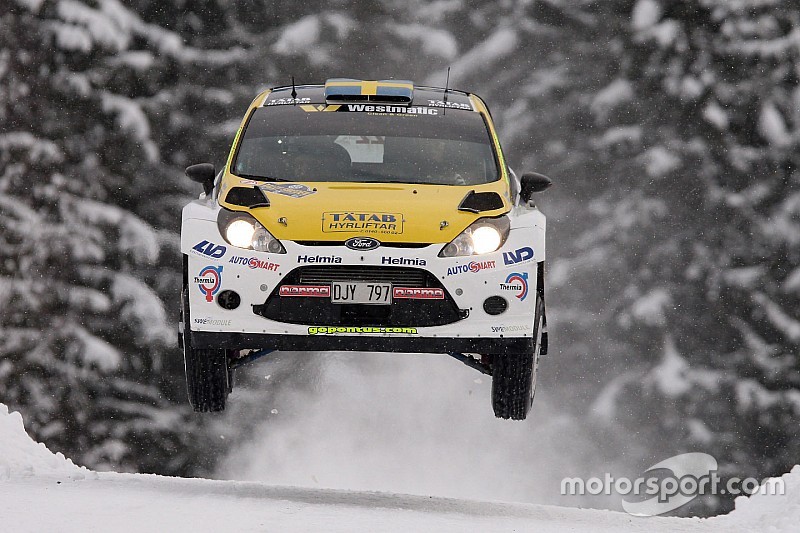 We continue our countdown of the 10 young drivers most likely to make their mark at the highest level of rallying in years to come - some of which will have a chance to prove themselves in WRC machinery in 2016.

If you missed the first part of our countdown, featuring places 10 to 6, you can read it by clicking here.

Despite the fact he is the oldest driver on this list by a pretty big margin, Camilli only made his first WRC support appearance in 2014. He crashed out of the JWRC lead in Germany before taking second in his home event in France, evidence enough that he deserved a full-time berth in a higher category.

Moving up to WRC2 in 2015, Camilli had the pace to go for the win in Monaco before hitting a rock on the penultimate stage.

He lacked consistency on gravel, but when the field returned to Camilli's preferred surface of tarmac, he quickly scored two podiums and was set to sign off with a victory in Wales if not for a late engine issue.

While another year of experience in a lower category might have been beneficial, he showed enough talent to deserve a shot in WRC – and if he’s allowed to spend next year as a learning season, he could set himself up for a long-term future with his 2016 employers M-Sport.

2014 was a massively successful year for Lefebvre as he swept WRC3, JWRC and ERC Junior, which yielded a much-deserved step up in his career. Mentored by Sebastien Loeb himself, he has been picked up by Citroen and, after six WRC2 outings, he ended the year driving one of the French squad’s WRC cars.

Lefebvre carried his great form over the winter to kick off with an astonishing victory in Monaco, his first run in the Principality. However, he would be off the podium for the rest of the season – crashing in Mexico and Italy, retiring with an engine issue in Poland and then being excluded from third place in Finland due to non-homologated ECU software.

He then joined Citroen alongside Meeke and Ostberg for four WRC rounds, and while his performance was not as eye-catching, he did bank points on two occasions.

Lefebvre’s season was not his finest, in part due to the severity of the jump he had to make, but he is still hot property and has a big opportunity to shine as part of PH Sport’s rotation on selected rounds in 2016.

Breen has been widely regarded as one of the most talented up-and-coming rally drivers for quite a few years now, having racked up an impressive list of accolades.

A WRC Academy crown in 2011 was followed by the SWRC title in 2012, although that was also the year when long-time co-driver Gareth Roberts passed away in a freak Targa Florio crash.

From 2013 onwards, Breen became a Peugeot factory driver, finishing third in ERC for two years running. After that, the team extended its operations to WRC2, allowing Breen to take on two championships.

His WRC2 run was a troubled one, with two podiums Monaco and Wales bookending a campaign that featured three mechanical retirements. He had a much better time in ERC with three wins, but suffered more costly technical issues and ended as runner-up.

Like Lefebvre, Breen will get chance to prove himself in a PH Sport-run Citroen DS3 WRC on selected events in 2016. His record suggests it's a shot long overdue.

The 2013 JWRC champion, Tidemand – the stepson of WRC podium finisher Henning Solberg – partly switched to rallycross in 2014, but still found time to record a WRC2 win and a memorable eighth place overall in Rally Sweden.

In 2015, he was back on a full-time schedule, enjoying a thoroughly successful but winless WRC2 run – and breezing to a dominant APRC title.

In his first WRC2 appearance of 2015, he made headlines by taking the overall lead in the shakedown – and while he did not win the rally, he impressed Skoda enough to become their factory driver and would take four podiums in five outings with the Czech manufacturer, including a dominant win in Spain.

While he is set to return with Skoda for another go at WRC2, the team, affected by the Volkswagen emissions scandal earlier this year, has postponed its decision over continuing until January.

Following Mikko Hirvonen’s retirement last year, Jari-Matti Latvala has become the sole driver to fly the Finnish flag full-time in the WRC. But while Latvala is still looking strong, if perhaps a little uneven, a new hope for Finland has arrived in the form of Esapekka Lappi.

The 24-year-old had been picked up by Skoda after sweeping the Finnish championship, and started his third season with the Czech marque in 2015 as the reigning ERC champion.

In the European gravel rallies which kicked off his WRC2, he looked the quickest. Yet he failed to win in Portugal and Italy due to mistakes, although then made up for it with victories in Poland and Finland. A mistake then forced him out of contention in Germany, and after coming second in France, he crashed out in Wales.

Only he and champion Nasser Al-Attiyah won more than two WRC2 rounds in 2015 – and Lappi took the most stage wins to boot. Yes, he made a few too many mistakes, but there is not a single doubt about the Finn's potential.

Just like his stablemate Tidemand, Lappi faces uncertainty due to Skoda's VW-related worries, but he does feature on the entry list for the 2016 season opener in Monte Carlo.