Ogier has all-but won the 2013 WRC Drivers’ title following his sixth win of the season on Rally Australia and the Volkswagen Motorsport driver was in demand on his debut at Rallyday, taking time out to chat to the large crowd on the main Rallyday interview stage, as well as signing hundreds and hundreds of autographs.

The Frenchman, who is normally used to driving a Volkswagen Polo R WRC, got the chance to sample a genuine ex-works Group B Audi quattro A2, originally driven by 1984 World Rally Champion Stig Blomqvist, who was also attending the annual rally extravaganza in the West Country. It was Ogier’s first ever drive in a historic rally car and that made the day extra special for the 29-year-old, who flew over especially from France.

“It was my first time at Rallyday and it was fun to drive the Audi quattro A2. I have never driven a historic car in my life until today. So it was a nice opportunity,” Ogier said. “It is very different to the Polo R WRC I drive normally. But it was a good experience and it is nice to feel the evolution, between 30 years. It is funny because the car is the same age as me. I am born in 1983. I want to thank the owner of the car for the chance to drive it. It was very kind of him.”

“It has been busy,” Ogier added, “There has been a lot of pictures and a lot of autographs, but it is a pleasure to do it. The event had also given me an opportunity to meet a lot of fans and see a lot of different cars from every generation.

Ogier also presented the inaugural ‘Brian Stubbings Spirit of Rallyday’ Trophy, created in honour of Brian, the co-founder of Rallyday, who sadly passed away in February this year. The first-ever recipient was Castrol’s Global Sponsorship Manager, Donald Smith, who has been instrumental in helping the organisers’ with the event since its inception back 2001.

“It is a great privilege to accept this on behalf of Castrol. I think the Spirit award is what really grasps it because there is a great spirit around this event - the people involved in it and importantly the fans, the people that come to it,” said Donald. “Castrol as a brand has got a great heritage in rallying and it is great that we can help and bring some of our stars and teams here.

“Brian was tremendous at starting this event with Darin [Frow] and building it along with his team. It has been a real partnership between Castrol and Rallyday, which has grown over the years for mutual benefit. We thank all the fans for coming and I want to place a lot of the thanks and support for this to everyone that works and delivers it. I think they are the spirit behind the event itself.”

Elfyn Evans meanwhile was another of the current WRC crop in attendance, driving the Qatar M-Sport World Rally Team Ford Fiesta RS WRC car, the same car that he took to sixth place overall on Rally Italia Sardegna back in June, when he made his WRC car debut.

“There were a lot of exciting cars here and a lot of people. It was good fun to go out in the Feature Stage and give the Fiesta RS WRC car a quick outing. It has been a really good day and I hope to see everyone again now on Wales Rally GB when we will be back out in the Fiesta R5,” said the young Welshman, who was joined at the event by his father, 1996 British Rally Champion, Gwyndaf. 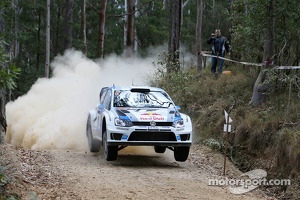 In addition, Guy Wilks, 2007 and 2008 British Rally Champion, also drove a World Rally Car, putting the MML Sports Mitsubishi WRC05 – Mitsubishi’s last WRC car – through its paces, while Prodrive brought along the MINI John Cooper Works WRC, a real contrast to the ex-works Mini Coopers, Lancia Fulvias and Hillman Imps which were celebrating their 50th Anniversary at this year's show.

Paddy Hopkirk, Mini Cooper driving legend and winner of the 1964 Monte Carlo Rally, was on hand to help mark the anniversary for Mini: “What a wonderful event,” said Hopkirk. “My goodness, if only there was the support for the WRC out there in the world that this day is getting then the WRC would be back on track. The enthusiasm here is brilliant. I last came about 5-6 years ago and I am glad they have kept it going. I had no idea how big the event had got – it is huge. I don’t know how many people are here and I haven’t been all around. But it is terrific.”

They were not the only famous faces, as Nicky Grist, Colin McRae’s former co-driver and Prodrive’s David Lapworth both took time out to help Colin McMaster publicly launch 'McRae, just Colin' – the new book on the 1995 World Rally Champion, while Tony Jardine, Sky Sports News' Formula One analyst, and Olympic skeleton Gold Medallist Amy Williams MBE were on hand as they gear up to compete on Wales Rally GB in November, the final round in the 2013 FIA World Rally Championship.

“I have heard stories and I have read about the legend that is Rallyday,” said Jardine, “and just walking through the paddock was amazing. The line-up this year was very special too. You can't have better than Ogier can you? Elfyn Evans is here too and quite a few of the stars of World Rally and most the people who are anybody in the world of British rallying are here. I think it is a testament to Darin and all the crew that put this on - and Castle Combe is such a great venue as well.”

In addition to the Castrol Feature Stage, which saw a record number of 55 incredible cars in action and the Clubman’s Rally Stage that ran non-stop for 8 hours, Rallyday 2013 also included demos from the world of Autotesting, Autograss and Rallycross and the largest ever Cooper Tires 4x4 Zone, where Xavi Foj - T2 Class Champion - who had come over from Spain to be a part of the show - spent the day signing autographs on the Cooper Tires stand. 4x4 action was also non-stop and everywhere you looked, from Race2Recovery on the fast 4x4 course and AWDC Comp Safari demos on the circuit infield, to the insane antics from the Trials & Challenge drivers and more sedate Camel Trophy & SAS vehicle parade.

Rallyday organiser Darin Frow said: “This year’s Rallyday has been an exceptionally special event for Jo [Stubbings] and I, as it was being held in memory of Brian, whose idea, vision and graft has made the show what it is today. Brian tragically and very suddenly passed away in February this year, so Rallyday 2013 really is for him as well as the fans. Both Jo and I would like to say a huge thank-you for all the offers of help and best wishes we've received and the incredible reception we've seen at this year's show making the day such a success. It's a ridiculous amount of work, but we absolutely love doing it and meeting everyone again, and for me personally Rallyday 2013 will be an unforgettable show in so many ways.”

Russell: Williams can focus on performance instead of survival