Volkswagen's Polo R made its debut in FIA World Rally Championship. The first race of the season in Monaco was more challenging than expected.

Wolfsburg - It was an impressive debut from Volkswagen in the FIA World Rally Championship (WRC): in their maiden competitive outing in the Polo R WRC, Sébastien Ogier/Julien Ingrassia (F/F) promptly finished runner-up at the Rally Monte Carlo.

In an interview, the Volkswagen works driver, who was making his first appearance in a World Rally Car at the "Monte", spoke about the success of the past four days.

Congratulations on a perfect start to the 2013 season. Did you believe, before the start of the Rally Monte Carlo, that you would finish runner-up at the first attempt? “I really had no idea how well we would fair. The Rally Monte Carlo was the first time we had come up against the opposition in direct competition.

Up until then we had only been able to compare data from the test drives with that from the Skoda Fabia S2000, with which I contested the whole of last season.” 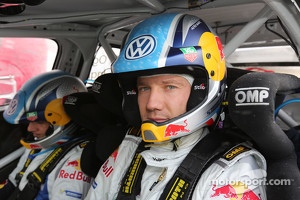 How significant is this result for the rest of the season? “The Rally Monte Carlo and the forthcoming Rally Sweden are so unique that neither really give a very accurate indication of our performance. We will have to wait for the first gravel rally to really gain any significant insight into what kind of performance we are capable of.”

What was going through your head as you lined up at the start of the opening special stage of the Rally Monte Carlo? “That was the moment I had been working towards for an entire year. As such, I was a bit nervous and my adrenalin levels were quite high.”

Were you surprised when you immediately won the Polo R WRC’s first special stage in the World Championship? “I did not receive any split times in the car throughout the stage, so I did not know how fast we were until we reached the finish. That was a great moment.”

How difficult was the 2013 Rally Monte Carlo? “Unbelievably difficult. This was the first time I had driven here in a World Rally Car. Some special stages were completely new to me.

This meant I was only able to rely on a limited amount of experience from past appearances. Selecting the right tyre and evaluating the conditions out on the course correctly was really complicated under these circumstances.”

That was a disadvantage in the afternoon, as the conditions deteriorated significantly with every competitor. As a result, we lost almost a minute and a half on Loeb. As of the second leg, we started straight after him. From then on our times were more or less identical.”

What does second place mean to you? “I think this is the first time that I’ve been happy with second place. I am normally only satisfied if I win.”

The only man who finished ahead of you is Sébastien Loeb, and he will not be starting at every round of the World Championship. That makes you one of the favourites for the title… “The title is not our goal this year. Our initial priority is to gain as much experience as possible at all the rallies.”