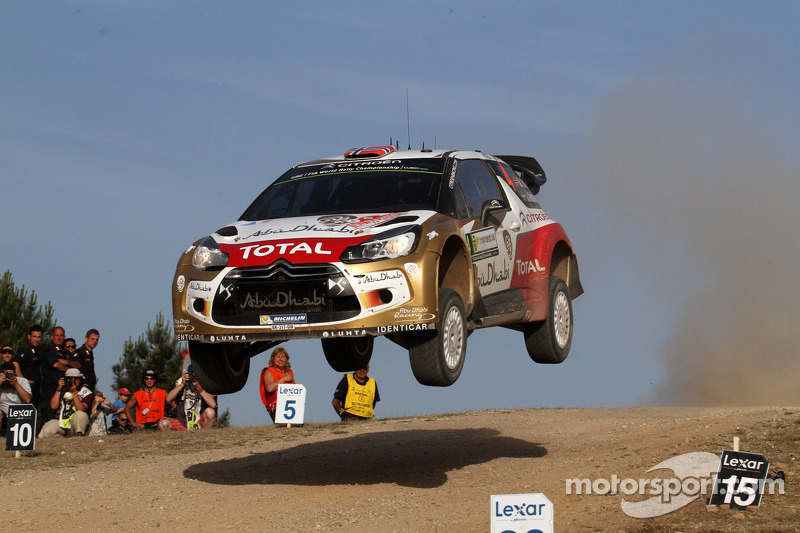 With two third-place finishes already secured in Sweden and Portugal, Mads Østberg and Jonas Andersson went one better in Sardinia as they ended the rally as runners-up.

After putting together a performance over the first two particularly demanding days, the Citroën Racing drivers were able to convert their good form into results today. Sunday’s schedule involved less than fifty kilometres of timed stages before the rally was due to end in Alghero.

Kris Meeke set off second on the road, with the unenviable task of sweeping loose gravel off the racing line. His sole aim was to make it to the finish and pick up some more experience. Despite rejoining under Rally 2 regulations on Saturday morning, he managed to score two points for the Citroën Total Abu Dhabi World Rally Team.

The last four stages were above all a great opportunity for Mads Østberg to claim his best result to date in the Citroën DS3 WRC. Having opted for a different tyre strategy to his main rivals (two soft and four hard Michelin tyres as opposed to five hard tyres for the other competitors), the Norwegian snuffed out any hope of a comeback for Jari-Matti Latvala to head into the final kilometres without any pressure.

Fifth in the Power Stage, he held onto second position in the final overall standings. This, his third podium finish in five races, means he now holds third place on his own in the Drivers’ World Championship standings after six of the thirteen rounds.

Increasingly confident thanks to the work carried out with the Citroën Total Abu Dhabi World Rally Team engineers, Khalid Al Qassimi also recorded his best result of the season as he took tenth place, picking up one point.

On its World Championship debut, the Citroën DS3 R5 confirmed the high hopes that had been placed in it. Entrusted to Sébastien Chardonnet and Thibault De la Haye, the reigning WRC3 champions and winners of the 2013 Citroën Top Driver series, the new flagship model of Citroën Racing’s customer racing line-up celebrated its debut outing by grabbing second place in the WRC2 category! A successful weekend was rounded off by Thomas Pletka’s win in the two-wheel drive class in a Citroën DS3 R3.

The next round of the WRC will be held on 26-9 June in Poland.

Mads Østberg: “We regularly matched the pace of our main rivals throughout the rally. Having said that, second place wasn’t completely sewn up when we started this morning. But we went for a good tyre strategy and that helped us to consolidate our position. I feel better and better in the Citroën DS3 WRC. My confidence is growing and I’m managing to drive faster without taking any risks. We need to keep working in order to make further progress. The next goal is to move up another place!”

Kris Meeke: “The rally had started well. We had good pace until the alternator problem meant we had to retire and rejoin under Rally 2 rules. From Saturday morning onwards, we were first on the road. It is always difficult to feel confident in conditions like that but it was an interesting and useful experience. I hope it’ll be useful in the future.”

Khalid Al Qassimi: “It was an especially difficult race. The stages were very rough. It was tough for the cars but also for the crews. We adapted the set-up throughout the first part of the rally. The changes began to pay off on Saturday afternoon. The times were a lot better even though we were sweeping the loose gravel off the line. The engineers did a fantastic job. They understood what I needed to feel comfortable in the Citroën DS3 WRC.”

Sébastien Chardonnet: “The Citroën DS3 R5 worked perfectly. We learned a lot this weekend and the technical team also acquired a lot of information. We did what we set out to achieve. It’s been a perfect weekend. We were even able to start working in more depth on the set-up, so as to acquire a bit more experience and to prepare for the rest of the season.”

Marek Nawarecki - Citroën Racing Deputy Team Principal: “It has been a very intense rally for Citroën Racing. The team has been really united this weekend. It’s a strength which meant we were able to make the right calls and give our crews the opportunity to showcase their skills. Mads managed to overcome the difficulties of the rally to grab a fine second place. Despite an alternator problem on his car, Kris was able to add to his experience and rack up a few more miles on the stages. Khalid improved a lot on what are very demanding roads. His tenth place is just rewards. And finally, we can also celebrate the superb debut of the Citroën DS3 R5. This was its first outing in the World Championship and it was also its first gravel rally. Sébastien Chardonnet produced a perfect performance and was able to share a lot of information with his engineers. Finishing second in the WRC2 class and ahead of all the other R5 cars is a very promising start!”