Sebastien Loeb had a comfortable 42-second victory in the Rally of Great Britain today, but with the event marred by a tragedy, Markko Martin's co-driver Michael Park killed in an accident on SS15 in his home rally (see separate story), Loeb took an ...

Sebastien Loeb had a comfortable 42-second victory in the Rally of Great Britain today, but with the event marred by a tragedy, Markko Martin's co-driver Michael Park killed in an accident on SS15 in his home rally (see separate story), Loeb took an intentional time penalty, handing the win to Petter Solberg. 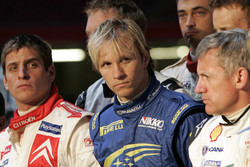 Sad celebrations: rally winner Petter Solberg and fellow drivers and codrivers pay tribute to Michael Park.
Photo by Subaru World Rally Team.
"The rally should have been stopped completely," said Loeb. "Marcus (Gronholm) didn't hesitate to do the right thing (by withdrawing). At this point it really doesn't matter who won the rally."

Celebrations were muted, with both podium ceremonies and press conferences canceled in the wake of the news of Park's tragic death, the first World Rally Championship fatality since 1993. Instead of champagne, the teams, drivers and spectators observed a moment of silence in Park's honor.

After Park's fatal accident, Peugeot immediately withdrew the team's other car, that of Marcus Gronholm and Timo Rautiainen, and the organizers also decided to cancel the two remaining stages (SS16 and SS17) in any case.

"Championships don't mean much compared to human lives," said Jean-Pierre Nicolas, the director of Peugeot Sport. "None of us wants to continue."

With Gronholm withdrawing out of respect to Park and thus scoring no points, Loeb would then have clinched the 2005 WRC championship. This was clearly not how the Citroen driver wanted to win a championship, so the rally leader drove into the final time control station two minutes early, incurring a two-minute penalty, and elevating Solberg to victory -- his fourth consecutive win in Wales.

Loeb, whose Citroen team is connected with Peugeot via their parent company PSA, ended up third for the event.

Gronholm, who had lost his chances for victory early on with a brake system failure on Friday, was on a charge this morning, but with nearly a minute's gap to Solberg's Subaru, he would not likely have been able to make a serious attack on Solberg even if the rally had run its full course. As it was, he was timed 45 seconds adrift of the Norwegian at the end of SS15, prior to withdrawing from the rally.

Francois Duval, Loeb's junior teammate, was elevated from fourth to second thanks to Loeb's penalty and Gronholm's withdrawal, having been just under two minutes adrift of Loeb on the road.

Harri Rovanpera finished fourth for Mitsubishi after a strong run, having run in third place for much of the event until gearbox problems dropped him back behind Duval at the end of day two.

"The situation didn't look bad when we first saw Markko's car on the road," recounted Harri Rovanpera's co-pilot, Risto Pietilainen, the first crew to arrive on the scene. "But when we got closer, we saw that things were bad."

"The ambulance arrived in a couple of minutes and the helicopter soon afterwards, in less than ten minutes," he continued. "But there was nothing that could be done ..."

Loeb now leads Solberg in the drivers' championship standings by 36 points, and can clinch his second championship by simply finishing ahead of the Norweigian. With his withdrawal and receiving no points, Gronholm dropped to third at 61, 38 points behind Loeb, and with only the thinnest of mathematical title chances remaining.

With Peugeot's withdrawal, Citroen also stretched out a bigger lead in the manufacturers' title race, and now leads its sister marque by 137 points to 117, making a Peugeot comeback a longshot at best.