Dani Sordo/Carlos del Barrio and Sébastien Loeb/Daniel Elena are fighting at the front.

At the peak of their powers, four crews served up a breathtaking battle for the lead of the Rallye de France Alsace, ending day three with just five seconds between them. Among them, Dani Sordo/Carlos del Barrio and Sébastien Loeb/Daniel Elena are still right there, fighting at the front. The final day’s racing promises to be absolutely spellbinding! 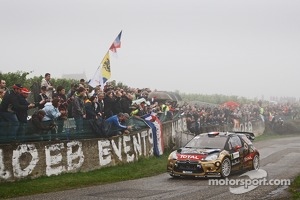 Overnight rain continued in the early morning, greeting the crews as they arrived at the Strasbourg service park. Unlike yesterday, tyre choice was a fairly straightforward affair this morning, with all the World Rally Cars opting for soft Michelin Pilot Sport tyres.

Proceedings began in the fog on day’s first stage, Hohlandsbourg. A little less comfortable than their main rivals, Sébastien Loeb and Dani Sordo lost a few seconds. And then on the Vallée de Munster stage, the Spaniard slipped from second to third position, whilst the Frenchman lost around ten seconds following a spin. “We changed my set-up after the testing we did before the rally, but now the car is oversteering quite a lot. Which is not exactly ideal in the rain,” commented the nine-time World Champion.

After a few tweaks to the suspension, however, Seb looked more assured in winning the next stage, Soultzeren (SS10). The then crews headed for Colmar for the midday service. As conditions promised to be just as wet in the afternoon, the DS3 WRCs kept their soft tyres for the second loop.

Of the five men fighting for top spot, Thierry Neuville was the first to stumble. The leader lost a minute after a minor impact and a puncture, which catapulted Dani Sordo into the overall lead in the rally. The Abu Dhabi Citroën Total World Rally Team driver held firm, despite taking to the grass on SS12, broadcast live by the television cameras: “A bit like in motocross, I ran a little bit wide onto the verge. Fortunately, nothing was damaged on the car. The roads are very dirty for the second loop, so that has knocked my confidence a bit compared with this morning.”

After leading throughout the afternoon, Dani had first place snatched from him on the Mulhouse super special stage. Second overall, just four tenths behind Jari-Matti Latvala, his assessment of this third day was nonetheless eminently positive: “It’s very close despite the conditions being extreme in places. It‘s very exciting to find myself in a four- or five-way fight for the win, even more so than in Germany when there were just two of us on the Saturday evening. I feel ready to carry on in very much the same vein tomorrow…”

A few seconds back, Sébastien Loeb found himself fighting with Sébastien Ogier, who had managed to climb back into contention. 5s behind Latvala and 3.5s adrift of Ogier, the Alsatian wasn’t entirely happy: “The rain often began to fall just as we were about to start the stages this afternoon!

And this time, I had trouble with the car understeering quite badly. I pushed as hard as I could, but the young guys are quick and I’m probably paying the price for not having competed in my DS3 WRC in the last few months. But I can’t complain, it’s fantastic for the crowd to see such a close fight and we still have a great chance of winning.”

By the end of the day, Mikko Hirvonen must have felt like something of a bystander, watching the scrap at the front from afar. After reclaiming seventh overall on SS8, the Finn maintained his position until the end of the leg. On his return to Strasbourg, he admitted: “As I lack confidence, I’m gradually losing ground on the others. And I just can’t put my finger on what we need to change. I’m hanging in there, trying to stay on the road and score and many points as possible tomorrow…”

Matching Evans throughout the day, Robert Kubica maintained his comfortable lead at the top of the WRC2 category. 3m 30.1s of his rival, the Pole can now manage his pace on the final leg.