"The roads were slippery in many places, with a lot of mud, but it was fun"

Continuing to enjoy an error-free performance, Dani Sordo and Carlos del Barrio ended day three of Wales Rally GB seventh overall. After rejoining under Rally2 rules, Robert Kubica and Michele Ferrara were forced to retired from the rally altogether shortly after the start of the day. 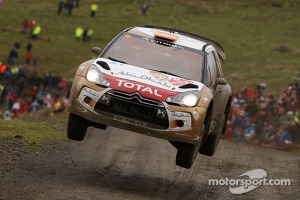 Featuring seven stages over a total of almost 100 kilometres, completed without any service period, the third leg of Wales Rally GB was something of a marathon session for the competitors still in the race.

First to arrive in the service park right at six o’clock sharp, Robert Kubica was appreciative of the work done by his mechanics the previous evening: “Thanks to everyone in the team who have made it possible for me return to action today. Fortunately, there wasn’t too much damage because I didn’t go off at high speed. I wasn’t pushing very hard yesterday, but I’m going to be even more cautious today. My aim is still to rack up as many miles as possible.”

Unfortunately, the Abu Dhabi Citroën Total WRT driver crashed out of the race on only the second stage of the day, after another off. This time, the damage to his DS3 WRC meant his rally was well and truly over: “Like yesterday, I had adopted a sensible pace, but that wasn’t enough to make up for a misunderstanding with one of the pace notes on a very fast corner. The rear of the car slid wide and off the road into a ditch, and we ended up rolling twice.”

Just like yesterday, Dani Sordo and Carlos del Barrio thus found themselves as the only representatives of the Citroën Racing camp left in the race. Second on the road, the Spaniards didn’t enjoy the best of the conditions. But they adapted as best they could and completed the leg without incident. They rounded off the day by winning the first of the two stages held in the grounds of Chirk Castle.

“The team asked me to get the car safely back home and that’s what I tried to do,” admitted Dani on his return to the Deeside service park. “That didn’t stop me from enjoying the day’s stages. The roads were slippery in many places, with a lot of mud, but it was fun. The car handled well in the conditions, so I’m happy.”

Thanks to his consistency, Dani Sordo climbed another two places in the course of the day. Now seventh overall, he will be looking to hold onto this position to the end of the rally on Sunday afternoon.

Ogier leads in Wales with one day to go