With 98 FIA World Rally Championship events under his belt, Daniel “Dani” Sordo returns to the Citroen Total World Rally works team in 2013. The Spaniard brings along his co-driver/navigator Carlos del Barrio to take on the task of scoring championships for the French team. They will team up with Mikko Hirvonen and co-driver Jarmo Lehtinen in their efforts to land Citroen a possible ninth Manufacturers title in 2013.

The championship team took their time on making a decision of who would be selected to take the Citroen after Sebastien Loeb decided to depart from full-time WRC competition. With nine consecutive championships now in the record book, Loeb and co-driver Daniel Elena will run selected world rally events, including Monte Carlo. 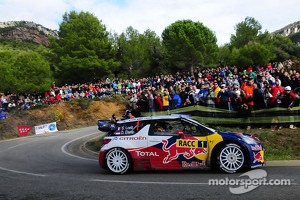 Sebastien Loeb and Daniel Elena in the Citroen DS3

Sordo returns to the French team where he started his adventures as a Citroen team Junior WRC driver back in 2005, and over the six years, he competed in 80 rallies. Now he and del Barrio are back where they belong.

“Obviously, I’m very pleased to rejoin a team with which I share so many good memories. This was my no.1 choice for 2013,” said Sordo.

Before Yves Matton became Citroen Racing Team Principal, he already saw the spark in the young rally driver, he handed him the chance to take control of the C2 Super 1600. Obviously Matton made a correct decision; one he hopes to repeat. Sordo landed the J-WRC title in 2005.

The next year, Sordo moved up the Xsara where he garnered four podium finishes, and more importantly earned the opportunity to become a “works” driver in the C4. The Spaniard collected 25 podium finishes which aided Citroen in securing four of their titles. He was also a team player and knew that the star for Citroen was the Frenchman!

I am still looking for my first win in WRC.

When the Prodrive MINI team wanted his services for their debut in 2011, Sordo was ready to take the chance to contest selective WRC events in the MINI Countryman. However, the ride was never for a full season, and still will not be per the comment by the Prodrive Team Principal. Dave Wilcock,

"Although we have faced many challenges, Dani always remained positive and loyal to the team and I am only sad that we could not have given him his first win. I know that he wanted to secure his first WRC victory in the MINI and had we been able to confirm a full programme for him in 2013, I am sure he would have stayed with the team,” said Wilcock.

Sordo admitted, “I am still looking for my first win in WRC and I am determined to secure it next season! I can’t wait to see the people I know again and get back behind the wheel of the DS3 WRC, in which I did some testing at the end of 2010.”

Sordo and Hirvonen will make Citroen a force to reckon with next year; the Finn was second in the 2012 championship. With two top drivers who have the needed experience on what is one of only two works team running the full schedule next year, the eight-time championship French team appears to have a lock on the 2013 title. Ford pulled out of the series as a factory team. MINI will contest selected rallies apparently, and Volkswagen is the newbie. Yes the German team did contest selected events this year but not with their Polo; instead they ran a Skoda. 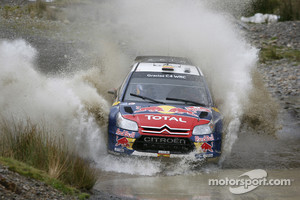 “We took our time in assessing the potential of the drivers available to line up alongside Mikko Hirvonen next season. Obviously, Dani was very high on our shortlist and his performances at the Rally de Espana proved that he can still perform at the very highest level,” explained Matton. “Dani is very well liked in the team and it’s a pleasure for everyone to see him return to the ‘family’. His profile complements Mikko’s in many aspects and it was important for Citroën to have a Latin driver for the Southern Europe and Latin American markets.”

Sordo added, “The last few years have been good for me. In another team, I got to grips with different working methods and I took on more responsibility in the car development process. I see this return to Citroën as a great opportunity.”