Solberg Leads Way For Stobart In Land Of The Gods

At the end of a challenging day in Greece the M-Sport Stobart Ford World Rally Team crews of Henning Solberg and Matthew Wilson hold fifth and sixth place respectively.

Mixed weather greeted the Ford Fiesta RS WRC drivers on their arrival at the seventh round of the FIA World Rally Championship and a mix of sunshine and intermittent rainfall followed at the Acropolis-based ceremonial start in Athens on Thursday evening.

Nevertheless, today’s action saw temperatures reach a staggering 35 degrees Celsius as the Cumbrian-based squad tackled a series of stages north of the service park and close to the base of Mount Kallidromo. The roads escaped yesterday’s downpour but earlier rainfall at the start of the week meant the roads were muddy in places and heavily strewn with rocks.

Norway’s Henning Solberg returned to his previous strong form throughout the day, reporting a good set-up and feeling with the car. The driver set a series of quick results including two top-five stage times during the afternoon loop. Solberg and co-driver Ilka Minor hold fifth overnight, 46 seconds behind Sebastien Ogier in fourth place.

Matthew Wilson and co-driver Scott Martin had a relatively trouble-free day but proved their abilities behind the wheel of a World Rally Car as they adopted a mature driving approach to ensure they made it safely through some of the most treacherous roads on the WRC calendar. The British pair hold sixth overnight. 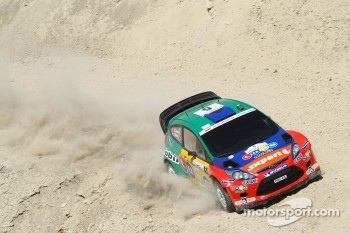 M-Sport Stobart team-mate Mads Østberg and co-driver Jonas Andersson were sitting sixth when they pulled into a remote service at the quaint coastal town of Kamena Vourla. The Scandinavian pairing were looking to adjust the car’s set-up over the afternoon pass and their suspension was altered before Stage 3.

Intermittent power steering problems on Stage 4 caused Østberg to hit a rock 8 km into the test which damaged the front left of his Ford Fiesta RS WRC. The 23-year-old was forced to retire but the team have reported he will return for the second day of action under SupeRally regulations.

Russia’s Evgeny Novikov got off to a flying start on the event’s opening 23.60 km stage, taking full advantage of his road position to finish the test third-quickest. However, disaster struck for the WRC’s youngest ever stage winner when Novikov had to retire on Stage 2 after broken suspension hindered his progress 10 km before the end of the test.

“Everything is working well – we’ve not really had any problems today and it has been a good day overall. There were no major changes made to the car at the remote service, we were quite happy with the feeling but we knew that the afternoon would be much harder. We had a couple of big mistakes on that last stage but no other problems. Tonight I just want to have a good sleep and I need to physically push tomorrow so hopefully we can continue with some good times.”

“Today has been hard - there’s no question about that. We had some small problems with the gearbox this morning and it’s been really slippery this afternoon. Stage 3 was very rough with a lot of rocks on the inside of the roads so we wanted to try to get the car safely through the stage. On a rally like this, if you push hard all the time then you can easily be caught out so it’s all about knowing when to push and when to take things more carefully. It’s been a long and very hot day with a lot of driving so I’m looking to get a good rest tonight in order to be on top form ready for tomorrow.”

“For sure, it’s not been the best start and it’s always disappointing to retire. Greece is a rally I enjoy but Jonas had all his pacenotes stolen from 2008 and 2009’s rally on the way here so we had to make completely new notes on the recce which was an added pressure. On Stage 4, we felt the power steering go and then we went slightly off the road which damaged the front-left. It’s not been the best day but I must try to concentrate on tomorrow which will be another long day. There’s still a lot that can happen but I think I will just try to get as much experience on these roads as I can.”

“It’s not been such a lucky day for me - the first stage was very good, the car was going well and then 10 km towards the end of Stage 3 the car stopped. I don’t know why - all we know is that there was something in the suspension that had broken. Now I will just go home, relax and try to get a good sleep. Tomorrow is a long day but I really want to push to the maximum and get as much experience in the car as possible.”