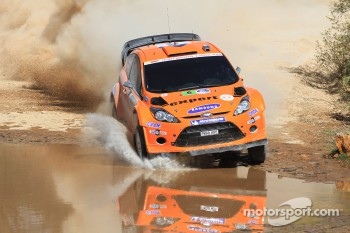 The M-Sport Stobart driver was presented with the card from Norway’s head of state this afternoon by Ford Team Principal Malcolm Wilson. Stoltenberg has met Solberg on several occasions and wanted to commemorate the landmark event by sending his fellow Norwegian a personally signed card.

“It is a great honour to be recognised by Mr Stoltenberg for reaching 100 WRC events, I am very touched,” said Solberg.

“It’s amazing how quickly the time has gone but I’d like to thank M-Sport for some fantastic memories over the past few years and hope that I’ll still have many more to come.”

Solberg started his motorsport career in bilcross and rallycross events and racked up five consecutive Norwegian Rally Championship titles between 1999 and 2003.

He had his first WRC outing in 1998 and in 2007 joined the M-Sport Stobart Ford World Rally Team alongside Cato Menkerud for a full championship campaign in the award-winning Ford Focus RS WRC. With five top-five finishes in his first year for Stobart, including a third placed podium finish on his home event of Norway and a third place in Japan, Solberg was the star for the Stobart Team.

The Norwegian continued with Stobart in 2008, occasionally representing the Munchi’s Ford team but was back full-time for M-Sport Stobart in 2009 when he landed podiums in Argentina and Poland.

Solberg became a YouTube phenonomen at the end of 2010. Over 50,000 people have watched Henning and brother Petter run in tandem in a hamster wheel on Norwegian game show “Who can beat Aamodt and Kjus” which saw Henning fall over on live TV. More recently, he appeared on the Norwegian version of Fort Boyard where he and his three team-mates won the series. Solberg’s team decided to donate their winnings to a Norwegian hospital.

In 2011, Solberg continues to drive for the M-Sport Stobart Ford World Rally Team alongside Minor in the new Ford Fiesta RS WRC.

The fourth round of the FIA World Rally Championship, Jordan Rally, will commence tomorrow – one day later than originally planned due to the late arrival of service park infrastructure.