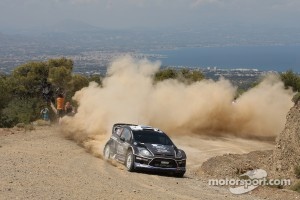 Contesting 65.55 km close to the rally base in Loutraki, Tänak and co-driver Kuldar Sikk embraced the rough terrain behind the wheel of their Ford Fiesta RS WRC to make it into the top-ten. Following the retirement of Daniel Oliveira and team-mate Evgeny Novikov, the Estonian found himself having to contend with the loose surface once again as he sought out a clean line with his early road position. Yet despite being disadvantaged running as the third car on the road, Tänak excelled to secure his position with a fifth and sixth fastest time respectively.

Returning for the final tests, Tänak impressed once more with a third fastest time over Aghii Theodori 2 (SS20) and a fifth fastest time through the 11.37 km of New Pissia 2 (SS20) – just 3.3 seconds adrift of pacesetter Jari-Matti Latvala and 1.1 seconds up on eight-time world champion Sébastien Loeb.

Elsewhere however, there was disappointment for Novikov and co-driver Denis Giraudet. Despite setting some impressive stage times over the first two days of competition, the duo were unable to translate their speed into points as the initial damage to their radiator on Day 2 resulted in engine damage on SS18. Regrettably, with raising engine temperatures, the pairing were forced to retire their Ford Fiesta RS WRC from the event.

Nevertheless, thanks to the Russian’s strong performance over the opening rounds of the season, Novikov holds sixth place in the WRC driver’s standings.

“This afternoon’s stages were ok with no dramas. It was still quite loose at the front but we did our best. On Saturday and Sunday we had quite a good run and were building our confidence with quite a good feeling in the car. It was more than a shame about Friday because we have been feeling really good over the last few days.”