Daniel Oliveira found trouble in the Norwegian portion of the Scandinavian round. 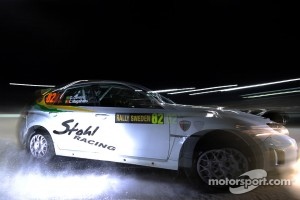 The Brazilian driver was forced to drop out after the radiator of his Class 3 Subaru Impreza was damaged in SS5. This prevented him from completing the first day of action at Rally Sweden.

Daniel Oliveira expects the Swedish Special Stages to be more pleasant to him after getting into trouble in the opening day of Rally Sweden, second round of the FIA World Rally Championship, which was run mostly in its neighbouring countryside.

During yesterday’s shakedown stage held near the Service Park in Hagfors, the 26 year-old Salvador (Bahia) driver was really enthusiastic after setting the second fastest time among all the Class 3 drivers on board the Subaru of the STOHL RACING. Daniel also finished 4th in the 1.90km Super Special Stage which took place in Karlstad last night. “It was a nice way to start this rally for the first time, although tomorrow will be a different story” expressed Oliveira.

Today’s action began really early in the morning (Daniel’s staring time was 5:58 am) and the longest test of the day, SS2 Mitandersfors (26km), kicked off in the Swedish territory and brought the drivers rallying into Norway. During the first four stages Oliveira and his Portuguese navigator Carlos Magalhaes set a secure but fast pace that enabled them to edge a Top-5 position against the local experts who rapidly were in charge of the rally. “We were making a good rally, with a good pace and always being cautious in this kind of terrain” said Daniel.

Unfortunately, when they were on SS5 and with just one corner away from the finish line, the pair was forced to drop out of the rally. “We were in the final part of SS5 and there was only one slow corner to complete the stage, I went off the road and the Subaru ended up hitting a tree which broke the radiator” explained Oliveira.

The damage on the car was not big and Daniel and Carlos were able to finish the stage, although they were delayed. However, after a closer inspection they decided to withdraw in order to avoid major damages to the car’s engine, considering that the Kongsvinger Remote Service Park was 70 kilometres away.

“Honestly, I’m really happy with my first experience in this kind of roads, I’m having a lot of fun” added the Brazilian driver, who will be re-joining the rally tomorrow as the STOHL RACING could fix the damages on the car.

Tomorrow’s route. The drivers will head early to the North of the Karlstad’s base. Rally Sweden’s second leg comprises eight special stages that totalize 177.76 kilometres of speed tests. They will be split into two identical loops of four stages each with a visit to the Hagfors Service Park in the middle.