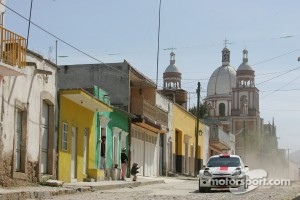 Only three points separated Tänak and Finnish archrival Juho Hänninen before they entered the final round of the eight-round championship. Tänak’s early exit, however, dashed the 24-year-old’s hopes of snatching the championship title despite him racking up four incredible victories over the course of the season.

The Ford Fiesta S2000 has achieved a remarkable 15 podium spots during this year’s S-WRC and M-Sport’s award-winning car has finished in three of the top four spots of the final leader board. Portugal’s Bernardo Sousa finished fourth in the standings and Nasser Al-Attiyah was promoted to seventh after his second place finish this weekend.

Tänak has had an incredible debut S-WRC season but the young Estonian was dealt a fatal blow when he was knocked out of title contention after breaking the front cross-member on his Ford Fiesta S2000 during Friday’s opening stage. The driver returned on Day 2 under SupeRally regulations where he racked up two stage wins. Tänak was lying sixth in S-WRC at the end of Day 2. The final day of competition posed no major problems for the 24-year-old driver who consolidated his sixth place finish. Tänak’s stunning performance over the course of the year has seen him finish on the podium more than any other S-WRC competitor and his results have tipped him as one of rallying’s biggest up-and-coming stars.

Martin Prokop had a strong season in this year’s S-WRC. Prior to Spain, the Czech driver had a mathematical chance of winning the title but needed to rely on the misfortunes of rivals Tänak and Hänninen in order to succeed. Prokop held fourth at the end of the first day but moved up to third when Craig Breen suffered from driveshaft problems on Saturday morning. The driver consolidated his third place on the final day of competition but 15 points were not enough to challenge Tänak for runner-up position and the former J-WRC champion had to settle for third for the second year running.

Six-time Middle Eastern Rally Champion Nasser Al-Attiyah delivered a polished performance over the course of the weekend to secure second in the Spanish S-WRC and seventh in the championship. The Qatari driver racked up five stage wins over the course of the weekend and fought hard throughout the event to keep Hänninen behind him. On Stage 10, however, Al-Attiyah damaged his gearbox after a small off which narrowed his lead in the S-WRC to a mere 0.4 seconds going into the final day. Al-Attiyah was unable to catch Hanninen on the final day but his strong performance this weekend has launched the driver to seventh in the final S-WRC leaderboard.

Irishman Craig Breen, who took over Eyvind Brynildsen’s registration for the final round of the S-WRC, had a sensational weekend in the Ford Fiesta S2000. The 21-year-old driver set the fastest time on Stage 2 and at the end of Day 1 the young driver was sitting third in S-WRC and 11th overall. Saturday morning, however, proved traumatic for Breen who suffered time loss from a broken right-rear driveshaft seven km into Stage 7. At the end of Saturday Breen had dropped to fourth in S-WRC. Breen got off to a flying start on Sunday and set the fastest time on the day’s opening stage. The Irish driver went on to consolidate his fourth place finish and full of confidence going into the final FIA WRC Academy round of the season – Wales Rally GB.

Bernardo Sousa’s final S-WRC event of the season got off to a difficult start when he was hindered with brake problems on the opening stage which caused him to go off the road on five separate occasions. The Portuguese driver encountered more bad luck on the road section to Stage 6 when his Ford Fiesta S2000 suffered from alternator failure. He held fifth overnight. Day 2 did not fare well for Sousa who retired before the start of Stage 12 with engine problems. The driver did not return for the final day of competition in Spain and will now concentrate on his next rally – Rallye du Valais – which he will contest in Switzerland next weekend.

Aaron Burkart was not nominated to score points in the S-WRC but had a solid performance at the wheel of a Ford Fiesta S2000 over the weekend. The German driver used Friday to get to grips with the car and recovered from a high speed spin on Stage 7. Burkart had a relatively trouble-free day on Sunday and pulled into the final service in Salou 19th overall and fourth out of the Fiesta S2000 crews.

“I am very frustrated with myself - runner-up is the first loser. On the other hand, we have learned a lot this year and I think there are many positives that I can take away from this season. The only thing we could do after the mistake on Friday was to drive and to learn more as much about the Spanish roads because it was my first time here. It has been a long year and this hasn’t been a good event for me but now I will must move on and look to the future.”

“I think I am even more disappointed than I was last year. In the middle of the season I was feeling very positive about the championship but after our crash in Germany I lost a lot of motivation. It has been a tough weekend and we knew it was over after the first day. The conditions were very tricky, it was slippery in a lot of places and there was a lot of dust so we didn’t take any risks. It has been a tough weekend but we just tried to enjoy these last stages – that’s all we could do.”

“I am really happy with my performance this weekend and to finish second. It has been my first time in Spain so it is even better to have this result. On Friday we had gravel roads which we enjoy but Saturday was a good confidence boost as we won the first three stages on asphalt which is not usually our preferred surface. We had a small off when we damaged the oil cooler of the gearbox and we were actually lucky to get back on the road. The car was not good after that and the gearbox temperature was quite high. Then today we had some brake problems but we tried our best to try to catch Juho but he was just too quick. Now I must concentrate on the final round of the MERC and hope that we can win the championship for the seventh time.”

“I am really, really happy as I’ve learned so much this weekend. Everything has been perfect today and I have to say that I’m really pleased with my speed this weekend. For sure, I was bitterly disappointed with the broken driveshaft yesterday morning but it could have been a lot of worse. I feel like I’m riding on the crest of a wave at the moment - the last couple of months have really gone well and I hope that will continue. I need to keep my feet on the ground – I’ve got a big challenge in Wales but it’s an event that I absolutely love so I just hope to keep the momentum going for next month.”

“It could have been much better this weekend but everything has been OK. It’s all been about trying to find a good relationship between myself and the car – we’re not on first name basis yet we’re certainly getting there! Friday was just about getting to grips with the car, the stages and the tyres. We had no front brakes on the last two stages of the day so that was very difficult. We had a big moment on the long stage yesterday morning when we were going sideways on a long-right corner. We were lucky not to hit the car against anything. Today has been good, we enjoyed this morning but we lost the front tyres this afternoon. Overall, it’s been a great learning experience and I’ve enjoyed myself a lot.”