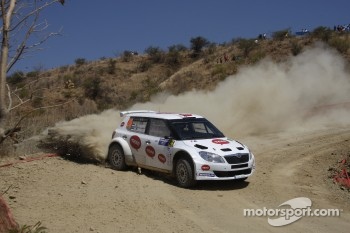 The Super 2000 World Rally Championship is braced for a thrilling battle for glory with all 10 registered competitors in action together for the first time this season on Sardinia&rsquo;s challenging gravel tracks.

With two rounds run, Estonian teenager Karl Kruuda tops the drivers’ classification courtesy of points finishes in Mexico and Jordan in his Skoda Fabia Super 2000. However, his advantage is likely to be short lived given that several chasing drivers have only contested one round compared to the two tackled by Kruuda.

Nasser Al-Attiyah has also entered the first two events of the year but arrives in Sardinia with zero points following a run of bad luck in his Barwa World Rally Team Ford Fiesta S2000.

He won on the road in Mexico in early March only to be stripped of victory when his car failed post-event scrutineering checks. On the last round in Jordan Al-Attiyah was leading on the final morning when his car suffered engine failure.

His misfortune has played firmly into the hands of the Qatari’s fellow title rivals Juho Hanninen, Martin Prokop and Bernardo Sousa.

Prokop, from Czech Republic, inherited maximum points from Al-Attiyah in Mexico while fellow Fiesta driver Sousa, who hails from the Portuguese island of Madeira, profited when the former Production Car champion retired in Jordan to land his maiden SWRC victory.

Finn Hanninen, meanwhile, moved up into second in Mexico following Al-Attiyah’s exclusion and makes his second start of the year in Sardinia at the wheel of his Red Bull Skoda on a high following recent success in the Intercontinental Rally Challenge.

Indeed, Hanninen’s last appearance in Sardinia was on the island’s IRC qualifier in June 2010 where he claimed a hugely impressive victory in a Fabia S2000.

Like Hanninen, Ott Tanak returns to SWRC duty in Sardinia after missing the previous round in Jordan. The Estonian, a protégé of world championship event winner Markko Martin, was a podium finisher in Mexico and is highly rated and a contender for victory on the Olbia-based rally.

Norwegian Eyvind Brynildsen is also capable of running at the front in his Fabia, which is run by Petter Solberg’s PS Engineering operation. The young Norwegian was rapid in Jordan before a puncture caused him to go off the road and retire from the opening day.

Andorran Albert Llovera arrives in Sardinia on the back of claiming his best SWRC finish to date when he came home fourth in Jordan in his Abarth Grande Punto S2000. Llovera, who is paralysed from the waist down in a skiing accident, uses hand controls, which makes his car 70 kilograms heavier than regular S2000 machines.

Frigyes Turan completes the SWRC runners in Sardinia and will be looking to make up for the disappointed he suffered in Jordan when his Fiesta caught fire in the closing stages, robbing the Hungarian of a possible podium finish.

New Zealand makes its long awaited return to the World Rally Championship this weekend with a history-making feat in the offing as Kalle Rovanpera closes in on the title.

Dani Sordo says he doesn't yet know his plans regarding his future in the World Rally Championship next year, but has ruled out the prospect of competing a full 2023 season.

Haas Formula 1 boss Gunther Steiner reckons the late world rally champion Colin McRae was the “most gifted driver” he ever met during his motorsport career that began in rallying.