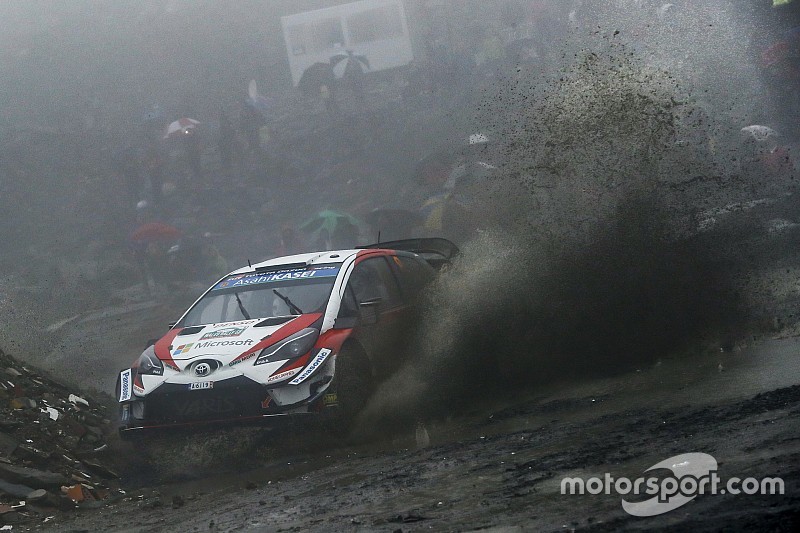 Tanak's lead has grown to 28.8 seconds over Neuville after winning the first two stages of the afternoon's loop, despite Neuville hitting back with victory on the day-ending Penmachno stage.

Neuville's climb to second overall was boosted by the retirement of M-Sport Ford's Elfyn Evans after he developed a misfire on the road to the first stage of the afternoon.

The Hyundai driver's overnight second place was soon confirmed after Toyota's Jari-Matti Latvala fell behind on the long-distance Brenig stage, as a stone damaged his windscreen while the Finn battled to find his rhythm. The problem meant Latvala backed off out of fear he had damaged his dampers and meant he would go on to end the day third overall after the final stage.

Esapekka Lappi made it three Toyotas in the top four overall as the Japanese manufacturer benefited from a car suited to the fast flowing stages of Friday. Lappi lacked the pace of teammates Tanak and Latvala having found himself "not brave" enough to push and struggling with car balance.

Defending WRC champion Sebastien Ogier continued his attempt to make up ground on his title rivals Tanak and Neuville after his morning was ruined by the loss of first and second gear late on.

Ogier's gearbox and clutch was changed in the service park ahead of the afternoon and he now lies fifth overall and 38.2s behind Tanak. But Ogier did claw time back to Neuville to trail the second-placed driver by 9.4s.

Teemu Suninen had been ahead of Ogier going into the the final three stages, but Suninen completed a miserable afternoon for M-Sport by crashing on the final stage and getting his Ford Fiesta WRC stuck in a ditch, dropping him out of contention.

Craig Breen was the highest-placed Citroen driver in sixth.

Hyundai's Hayden Paddon was seventh ahead of Mads Ostberg, with the pair encountering more difficult conditions by running further down the order. Ostberg lost some time after running wide up a steep incline in the last stage, but remained comfortably ahead of Andreas Mikkelsen in ninth.

The WRC2 field was again dominated by the impressive Kalle Rovanpera – who extended his lead over Skoda driver Pontus Tidemand to almost a minute – and is 10th overall.