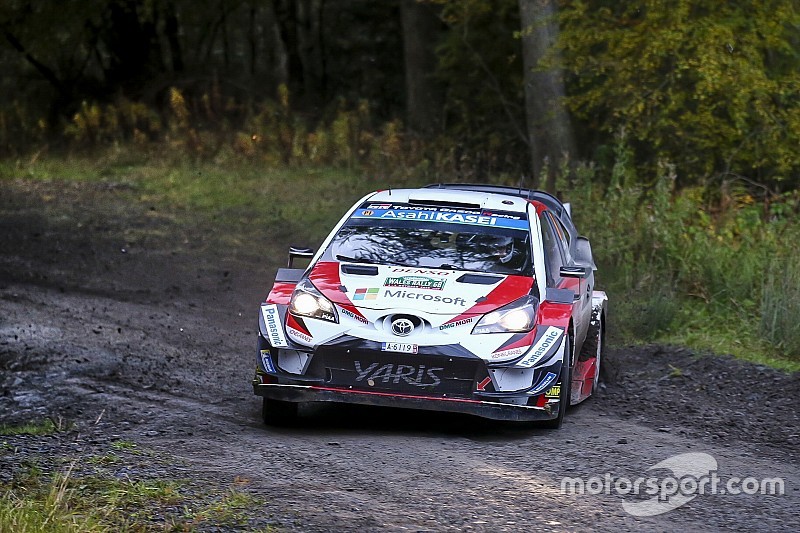 The Estonian had been leading the event by 41.9s from Ogier and looked in total control as he headed towards a fourth consecutive WRC rally win, despite a hefty off in shakedown before the event.

But on the Sweet Lamb Hafren stage, SS16, he pulled off to the side of the road.

After investigating and then removing his helmet, oddly Tanak then drove the car up an escape road before exiting, and live WRC pictures showed him laying on the floor as co-driver Martin Jarveoja attempted to console him.

The car appeared undamaged, and Toyota Gazoo Racing Tommi Makinen said the team were unsure of the issue but it could relate to the radiator.

The radiator could explain Tanak’s stoppage, as he may be preserving the car so that he can fight for the five championship points on offer for the power stage.

The top four are now split by under 15 seconds, with Ogier leading the remaining Toyotas of Esapekka Lappi and Jari-Matti Latvala, and the top Citroen of Craig Breen.

WRC title leader Thierry Neuville – who entered the event 13 points ahead of Tanak – had been second to the Toyota driver on Friday morning but made a mistake on SS11, pushing himself down to ninth.

If the result remains as it is now, Ogier would lie just 2 points behind Neuville, with Tanak a further 15 behind.