M-Sport Ford World Rally Team’s Ott Tänak put in a sensational performance on the last round of the FIA World Rally Championship (WRC) this weekend, only to have his hard work undone by a mistake on the final day.

Elsewhere, the 2012 RACC Rally de España ended prematurely for John Powell as he was forced to retire on Day 1 with a persistent ear infection.

Impressing behind the wheel of their Ford Fiesta RS WRC over the opening two days’ rallying, Tänak and co-driver Kuldar Sikk established themselves as one of the most promising up-and-coming crews in the championship. 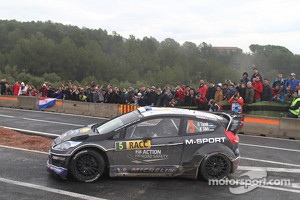 Having led the rally in its early phase, the Estonian set some strong times on both gravel and asphalt and added a further two stage victories to his year’s tally.

With 93.94 km of competitive rallying left to run, Tänak was hunting down his second consecutive podium of the year.

In control over the opening stage (SS13), he was on course to close the gap to rival Mikko Hirvonen and increased his lead over fellow Ford driver and former rally-leader Mads Østberg.

However, battling with less than perfect pacenotes, the 25-year-old clipped a barrier 15 km into SS14 – losing ten seconds and fourth place in the process.

Keeping his composure, the youngster ushered a resurgent comeback over the remaining 10 km to lose just five seconds to Østberg and lay a mere 1.9 seconds adrift of reclaiming his fourth place.

But disaster struck through the second pass of Riudecanyes 2 (SS16). Continuing to struggle with the pacenotes, the pairing carried too much speed into a tight right-hander.

Running wide, their Fiesta made contact with one of the barriers that line the smooth-asphalt roads and forced an untimely end to what was set to be another strong result for the Estonians.

Improving throughout his debut season in the WRC, Tänak has impressed in recent months. Claiming eighth position in the Drivers’ Championship, the youngster has regularly challenged his more experienced rivals for both stage wins and overall positions.

This season has also seen the Estonian claim his first Power Stage victory – at Rallye Deutschland – as well as seeing him lead his first rally outright, on the first day of competition here in Spain.

Ott Tänak (DNF) said: “It has been a very difficult day for us which only got worse this afternoon. We ran wide on the first stage [this afternoon, SS16] and hit a barrier – I was just carrying way too much speed into the corner.

“For sure the event had been going really well before today. We set some good times on the first day and then I had a really good feeling on Tarmac yesterday – the car felt great and I had a lot of confidence on all of the stages.

“Unfortunately we didn’t have perfect pacenotes today and it was really difficult to push. We just tried our best, and it is really disappointing to end the season like this.”