The World Rally Championship is going through numerous changes for 2017 that should provide fans with even more entertainment, as an evocative and exciting new generation of machinery arrives in the series.

It would be fair to say that rallying has struggled in recent years to bring the kind of awe and wonder that are hallmarks of the sport's past.

The introduction of new regulations in the WRC look set to change that though, with more power at the driver’s disposal and an attack on the visual senses as the cars become barely recognisable from their road-going brethren.

Power is on the up as the inlet restrictor is increased by 3mm up to 36mm, although boost remains at 2.5bar, which will see most of the field producing something closer to 400bhp, rather than the circa 300bhp the previous machines managed to muster.

That extra power is kept in check as the regulations require a switch back to electrically-controlled centralised differentials. Meanwhile, the minimum weight of the car is also reduced by 25kg, changing the power-to-weight ratio even further as a result.

The regulations introduced for 2017 are designed to evoke a sense of nostalgia from the steadfast rally fan, but also ingratiate a new generation of fans, drawing them in with road-going cars that look and sound like their Group B forefathers.

Machines such as the Audi Quattro S1, Ford RS200, Lancia Delta S4, Peugeot 205 T16 and MG Metro 6R4 that defined a generation were spectacular to look at, and frankly a little bonkers, which ultimately led to the category's demise.

So, with all of that in mind, let’s take a look at what is in store for 2017 as the four manufacturers go head-to-head...

The Ford Fiesta has been around for many years in various forms, but none as fearsome as what M-Sport are about to unleash on the WRC.

M-Sport has been campaigning the Fiesta regularly since 2010, and has a wealth of experience re-designing and tuning it for various rally categories. The challenge for 2017 is much larger though, with much more emphasis being placed on aerodynamics, as rules surrounding overhangs, inlets and outlets, the size of diffusers and even the scale of the rear wing have been amended. 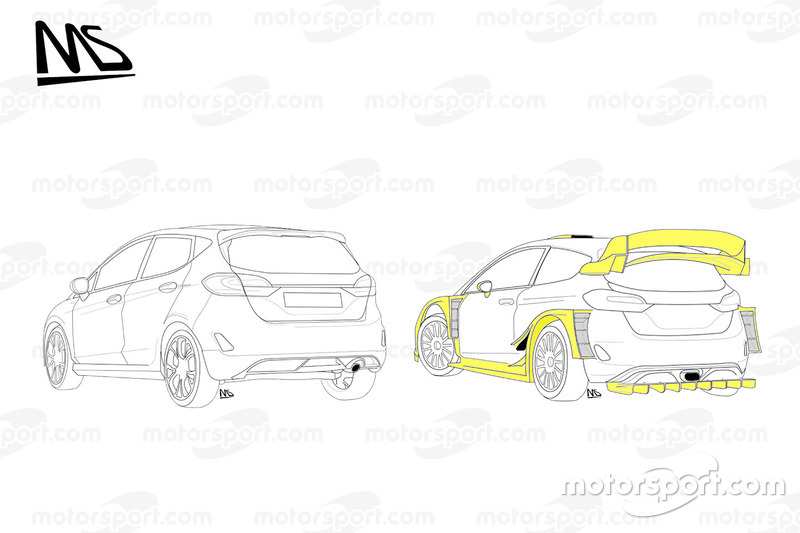 The yellow highlights in the above picture show just where the Fiesta has been beefed up to take on the trials and tribulations of the differing surfaces it'll encounter around the globe.

But what do all these new bodywork trinkets scattered around the car mean? They'll help the cars to be more aerodynamically efficient and should bring a healthy dose of downforce to the party too.

Road cars these days are designed to be extremely efficient, with the drag coefficient studiously observed in order to improve fuel efficiency, as each manufacturer looks to trump the other. After all, it's numbers like these that help us to decide which product of the many available that we'll pop to the shops in or punt down the motorway.

When using these cars as a base, widening their track and altering their stance has a significant bearing on their aerodynamic performance, as the bodywork that encloses the displaced wheels creates turbulent flow structures that are less than optimal.

The new regulations allow many more avenues for them to marginalise these issues, optimising flow around the car and bringing the coefficient closer to the base models. Furthermore, they've been given the scope to generate downforce, with an expansive diffuser placed at the rear of the car, while the front bumper and chin spoiler can be more carefully crafted to divert airflow around and under the car in a more positive way too. 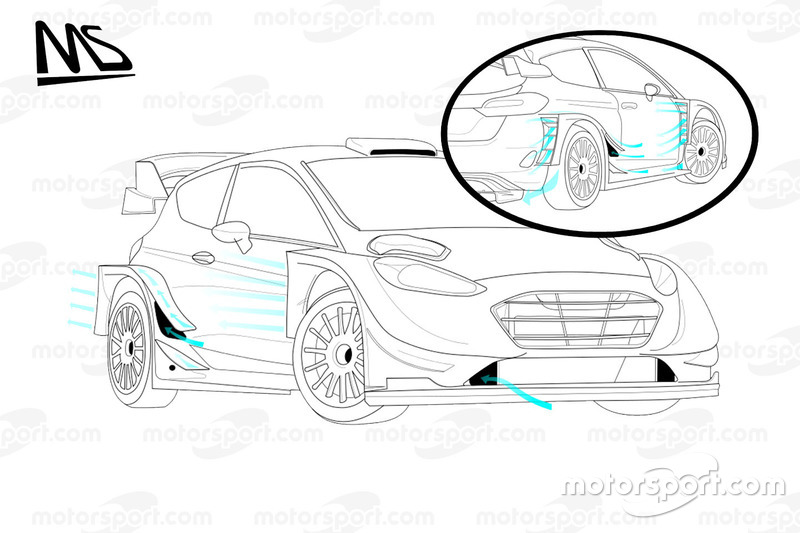 This illustration is not designed to exhaustively determine how the airflow moves around the car but should serve to indicate roughly what the various new appendages are doing to manipulate the airflow around the car.

As with any car, one of the largest aerodynamic issues faced by the designer is controlling how the air spilt by the wheels and tyres is controlled. This is a dynamic issue too as the wheel and tyre are constantly moving and in the case of the tyre changing shape.

Partially enclosing the wheel in an arch has been the preferred method of designers for decades, but from an aerodynamic perspective, if the design is not optimised, this can lead to lift - and as we’ve seen in other series, this can lead to quite spectacular airborne crashes.

Although WRC cars are not doing the kind of speeds we’d expect to see at Le Mans, the increased cornering speeds that might be achievable in 2017 might make them particularly sensitive while jumping and/or in yaw. While previous WRC arch designs have taken this into account, with the rear lower edges cutaway, the new regulations take things a step further.

In the case of the Fiesta, airflow taken in by the front bumper is diverted to the outlets crafted into the rear face of the front wheel arches (inset). You’ll note that multiple winglets have been stacked within, in order to better define the direction of this airflow as it is rejected, while taking into account that the wheel angle constantly changes.

This improves the airflow toward the canards and inlet ahead of the rear arch, which serve the same purpose as those at the front, improving the performance of the diffuser and rear wing.

Meanwhile, the enlarged side skirts help to keep the airflow moving at the lower levels in check. This previously untreated airflow may have been damaging to the diffuser that can now be found at the rear of the car, as it escaped under the car.

The rear spoiler is made up of several surfaces, with the only real limitation in size being that it must stay within the outline of the car when viewed directly from the front. As such, you'll note that the two plane assembly is accompanied by vertical stabilisers either side of them.

Citroen re-enters the sport as a full works team for 2017, casting aside its DS3 in favour of an all new C3, as the marque looks to promote the new design on the world stage. Fortuitously, the C3 met the with the minimum dimensional criteria rather well, but looks more boxy than the curvaceous Fiesta we've already looked at. 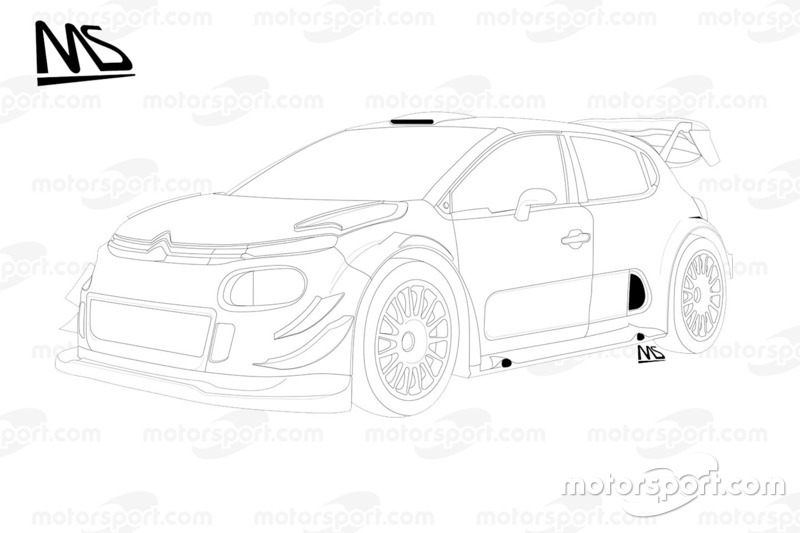 The C3 features a heavily redesigned front bumper, maximising the 60mm tolerance in the regulations, both improving front-end downforce and crafting the direction of airflow around the rest of the car.  Meanwhile, the front arch is complemented by an outlet in its upper surface, energising flow along the top surface of the door panels. 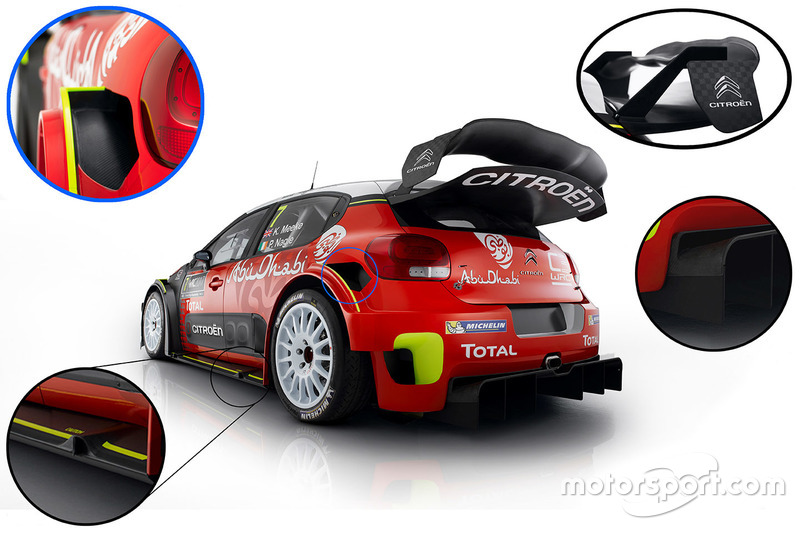 The side skirt is appreciably wider than some of the others on offer, merely by the reduced extension of other bodywork above it. The skirt extends flush from the front to the back of the arches, with two bumps placed equidistant from the arches (lower, left inset). These bumps not only perturb the flow moving across the skirt's upper surface, but also appear to have outlets placed within, perhaps displacing airflow taken in at the front of the car.

The rear arch is supplemented by a D-shaped inlet just ahead of it, while a small outlet is found in the upper-rear corner of it in order to optimise flow around it (upper, left inset). The arch height is curtailed and merges with the bumper, where another cutout can be found that works in tandem with the diffuser.

The diffuser is designed to make use of a change that permits it to extend out a further 50mm behind the car, while an aperture can be found above the it, allowing airflow to funnel out over its upper surface energised by the centrally-mounted exhaust.

The rear wing (upper right inset), like the others, features two main planes, although the lower of the two is a much flatter, longer plane than the rest taking into account the shaping of the tailgate. Two swan-neck style supports connect to the upper endplates, of which the upper plane is mounted between.

The curvature of the upper plane is of note, increasing the overall surface area available with its distinctive W-shaping in the centre. You’ll also note the use of a significant gurney running around the trailing edge of the plane, shaped to take into account the aforementioned shape of the plane.

Look out for Part Two tomorrow (Friday), where we examine the new cars from Hyundai and Toyota in more detail.