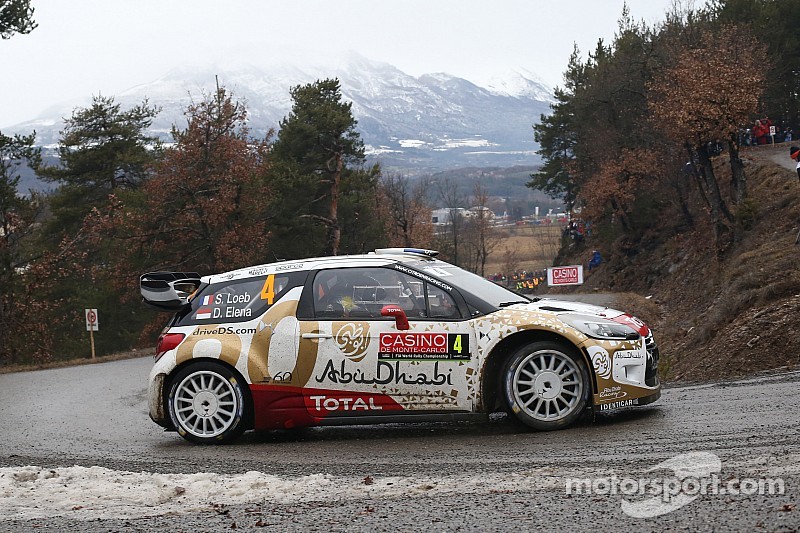 Sébastien Loeb ended the Rallye Monte-Carlo with the most stage wins, extending his record to 905 fastest times in the World Championship.

After arriving in Monaco last night, the Rallye Monte-Carlo crews began the final leg this morning with a 45-minute service period. Tyre choice was above all dictated by the goals set for the closing stages of the rally.

The Citroën Total Abu Dhabi World Rally Team’s sights were set on scoring points in the Power Stage. Kris Meeke went quickest on SS13 before Sébastien Loeb claimed the 905th stage win of his World Championship career at the end of the Col de Turini test.

We enjoyed that! We managed to find the pace and the DS 3 WRC was perfect.

On the Power Stage, Kris Meeke topped the timesheets again. The Briton thus collected the three bonus points on offer, as he finished just ahead of Sébastien Loeb.

Like last season, Mads Østberg recorded a brilliant fourth place at the end of the Rallye Monte-Carlo. Despite rejoining under Rally2 rules yesterday, Sébastien Loeb and Kris Meeke nonetheless finished in the points, in eight and tenth positions.

Stéphane Lefebvre made a brilliant start to his season in the FIA WRC2 championship in his DS 3 R5 as he secured a clear win in the category. Quentin Gilbert was the first of the FIA Junior WRC drivers in his DS 3 R3-MAX, ahead of Christian Riedemann and Ole Christian Veiby.

Next up is even more ice and snow at Rally Sweden on 12-15 February!

Yves Bonnefont (CEO of the DS brand): “To kick start the celebrations of the 60th anniversary of the DS, reuniting the DS 3 WRC and Sébastien Loeb at the legendary Rallye Monte-Carlo was a special, one-off occasion. Long before the World Championship was created, the DS had already won twice in Monaco. I’m delighted by how much the entire team enjoyed working once again with Sébastien and the enthusiasm of the fans for our project. The 2015 Rallye Monte-Carlo was a huge celebration of rallying, which went far beyond the stages themselves and the purely sporting side of the event, setting the tone for this year’s 60th anniversary of the DS!”

Yves Matton (Citroën Racing Team Principal): “On behalf of the entire team, I would like to thank Seb and Daniel for having accepted to take part in this year’s Rallye Monte-Carlo with the Citroën Total Abu Dhabi World Rally Team. They rose to the challenge we set for them with exceptional verve and determination. After fourteen months away from the WRC, they showed they had lost none of their talent in finishing with the most stage wins. We showed that the 2015-spec DS 3 WRC was very competitive, winning eight stages out of a total of fourteen. Kris fought hard right to the end and won the Power Stage and Mads was exemplary throughout the rally. I know he is already thinking about Rally Sweden!”

Mads Østberg: “I’m very happy to reach the end of this year’s Rallye Monte-Carlo in fourth position. We were consistent and quick. Perhaps we might have hoped to do a little better, but fourth position is a good result. I’m now going to concentrate fully on Rally Sweden, which starts in less than two weeks.”

Sébastien Loeb: “We enjoyed that! We managed to find the pace and the DS 3 WRC was perfect. When we set off on the first stage, it was as if Daniel and I had never been away! I was very pleasantly surprised by the feeling and the times we set right from the word go. The first two legs were nonetheless very difficult, but we had to push given we were fourteenth in the running order. The conditions didn’t really work in our favour and a minor mistake proved very costly. But that takes nothing away from the fun we had in the DS 3 WRC. We experienced a lot of good moments. It was a really great experience for Daniel, at home, and for me!”

Kris Meeke: “The aim was to try and score some points in the Power Stage in order to end the rally on a high. I managed the tyres on SS14. That undoubtedly helped me to keep a 0.2-second gap at the end of the last stage. I won a few stages and we were quick. So that’s a very pleasing point, because it means we clearly have the speed to compete.”

Sebastien Loeb not planning to return to rally in 2015