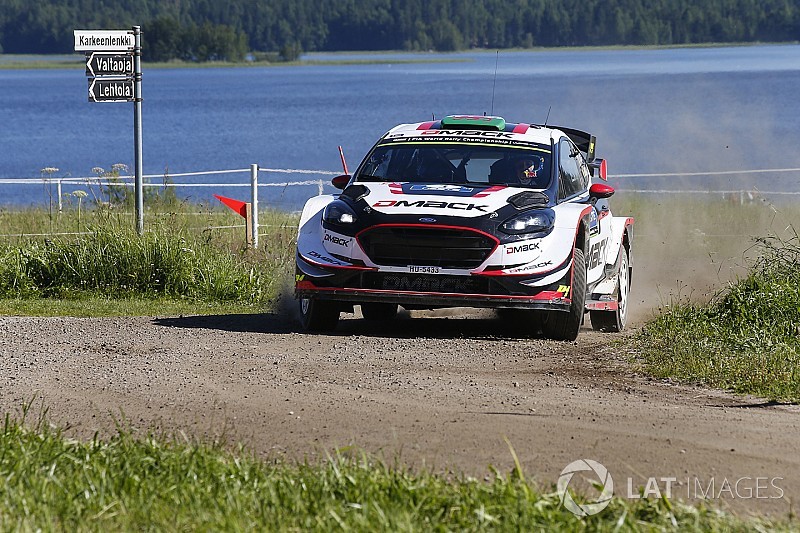 Elfyn Evans’ second place in Rally Finland looks to have strengthened his position in the driver market for the 2018 WRC season.

M-Sport team principal Malcolm Wilson insists the Welshman is “locked down” with the British squad for 2018, but that hasn’t stopped Toyota and Hyundai showing interest in his services next season.

Evans’ Rally Finland runner-up spot backs up his stunning effort to come within seven tenths of a second of winning his first WRC round in Argentina earlier this season.

Despite ruining Toyota’s hopes of a one-two on the Puuppola-based team’s home round last week, team principal Tommi Makinen admitted he was impressed with what he’d seen from Evans throughout the year.

Makinen told Motorsport.com: ”This was a very good drive from him and it’s interesting to see what he is doing next season.

"There’s always interest in the young guys when they are able to make results like this, it would be interesting to talk about next year.”

Despite a third place from Juho Hanninen in Finland, he is widely expected to lose his full-time seat next season, particularly with Esapekka Lappi winning on just his fourth outing in a factory Yaris WRC.

Asked about plans for next year, Makinen said: “We are still working on next year, nothing is decided in our team.

"We have to talk to the Japanese [side of Toyota Gazoo Racing] about what they want from next year and we are doing that at the moment. We know more soon after that.”

Makinen is keeping a close eye on all three M-Sport drivers, with Sebastien Ogier and Ott Tanak also understood to be talking to the four-time champion about joining Toyota.

Wilson understands keeping Ogier will be hard work given the financial implications of retaining the Frenchman, but he’s invested so much in Evans – like Tanak – he’s not keen to let him go.

“Elfyn’s not going anywhere,” Wilson said. “Like I’ve said all along, the ideal scenario for me is that we keep the team as it is and that means Elfyn stays.

“I’ve been really impressed with what I’ve seen from Elfyn in Finland. We all know how quick the Finns are and we all know what it means to be right up there on this rally.

"Beyond the result though, it’s the steely determination Elfyn showed once again on this event. On Friday it was a really tough day, but he bounced back very, very well.

"This result looked a long way away on Friday night, but he came back with real speed to take a spectacular result. And that result was event more impressive given that he missed out on his pre-event test.”

Evans feels his efforts with the DMACK World Rally Team this season merit a full-time seat next year.

“This result was great and I’m pleased with the way we were able to bounce back from Poland,” said Evans. “In fairness, the last three rallies haven’t been so good. That last rally was a bit of a stay-at-home job for us, it was that bad.

"But we’ve recovered and recovered well. Look at the stage wins and the championship positions, look at everything we’ve done.

"Yes, there have been some events where we have struggled to make everything work perfectly, but on all of the other ones we’ve been there. I think we’ve earned our place next season.”

Driver market speculation went into overdrive in Finland last week, with Evans reckoned to be on his way to Hyundai to replace Sordo.

Hyundai has come close to signing Evans before – he would have driven for the Korean team if Thierry Neuville had gone elsewhere this season – but team principal Michel Nandan says he will field an unchanged squad next year.

Citroen not ruling out WRC competition return for Loeb