Ott Tanak insists Toyota needs to push harder to win the 2018 WRC title despite his recent hat-trick, as its Turkey one-two came on a poor weekend for pace.

Heading into the series' summer break in June, Tanak was 72 points behind championship leader Thierry Neuville and 45 off reigning champion Sebastien Ogier.

Since then, Tanak has won three rallies rallies in a row in Finland, German and Turkey, with last weekend's event Toyota's first WRC one-two in 20 years as he led home teammate Jari-Matti Latvala.

Those results have brought Tanak past Ogier and to within 13 points of Neuville, while also giving Toyota the manufacturers' championship lead.

But while Tanak dominated in Finland and Germany, he struggled for pace in Turkey and ran as low as ninth at first before making progress and benefited from chaos in the rest of the field.

“All the team need to keep their heads down and keep working and focus on the next events,” he said.

“We didn’t have the speed at times and we need to keep improving if we want to stay in this fight. The coming events are different challenges.

"All the people in the team are so motivated to do well. We hope we have enough.

"I have no doubt that everything is possible. It’s difficult in this moment, when you are used to fighting at the top, and we did not have the pace and this was, maybe, our lowest event of the season.

"But now we have a one-two and it’s been a history-making result for the team. That’s how life is sometimes.

"We need to carry on like this. We had some weaknesses in events like Sardinia and it’s good to see that the engineers have been working on some improvements.”

Having previously denied he was even looking at the championship, Tanak did now acknowledge he was a title threat. 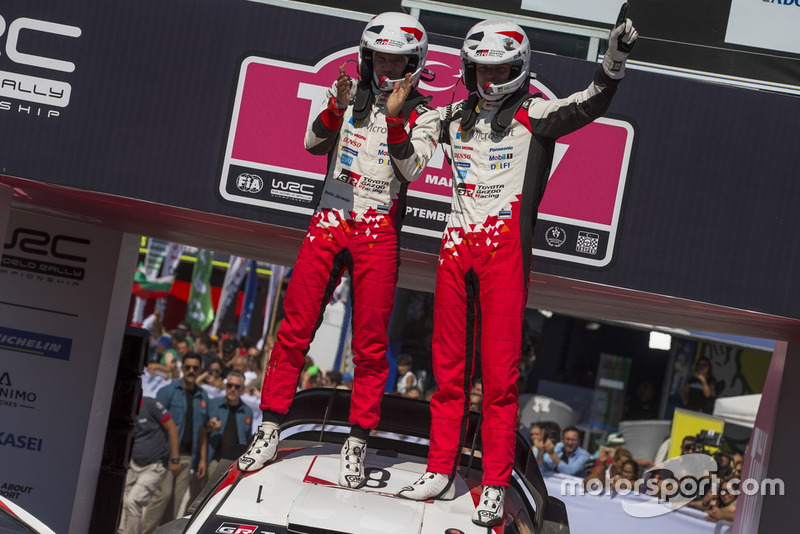 Both Neuville and Ogier led in Turkey, ending Friday 0.3 seconds apart in first and second places, before having incidents on leg two.

Neuville had to retire with broken suspension, but came back to take maximum Power Stage bonus points.

“We are fighting for the championship against some very hard guys to beat,” he said. “We had to give it everything. In all honesty, I feel we should have taken the win.

"We were clearly the fastest, especially on Friday when we were first on the road and leading at the end of the day.”

Ogier, who broke a wishbone, fixed it and continued but then crashed out, was similarly defiant

“Now we can definitely see it’s a three-way fight,” said the M-Sport driver, now 24 points behind Neuville. “There are still three rallies to go and everything is possible. Nothing is finished yet.”

Ogier set to return to Citroen for 2019