Latvala ordered not to fight Tanak for Australia win 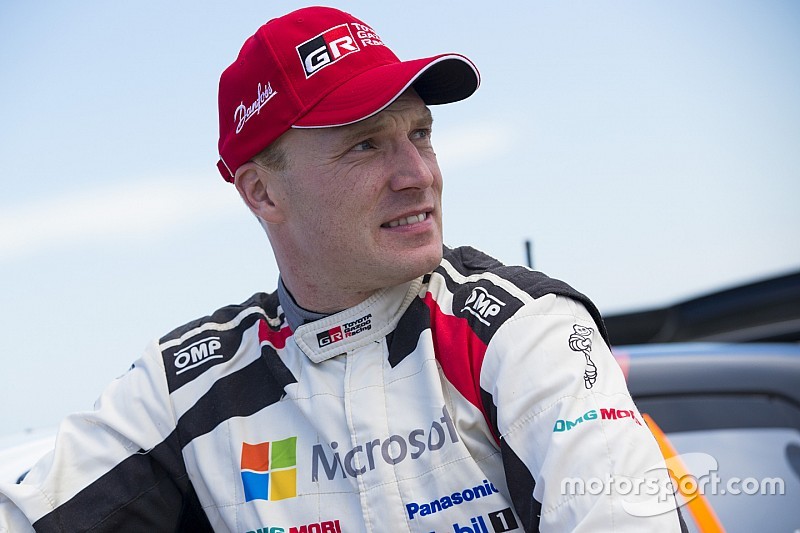 Jari-Matti Latvala will slot into a rear-gunner role on the final day of the WRC season, having been told by Toyota not to put pressure on leader and title contender Ott Tanak.

The Finn says that he and Tanak were told not to concentrate on each other's times heading into today's second loop of stages, Latvala having come out of the morning loop with a 3.2s lead.

It was then expected that the team would reverse their positions tomorrow if it would help Tanak seal the title ahead of Sebastien Ogier and Thierry Neuville.

That will not longer be necessary, though, after a decision to only take a single spare tyre into the afternoon loop backfired for Latvala. With the forecasted rain not appearing and temperatures warmer than expected, Latvala suffered higher-than-expected wear and dropped to 10s behind his teammate.

His hopes were further dashed thanks to an ill-timed rain shower during the evening Super Special Stage, with Latvala now more than 20s behind Tanak.

As a result the new instruction from Toyota is to not take the fight to Tanak tomorrow, and Latvala is instead set to focus on Hayden Paddon in third and leave the Estonian at the front of the field.

"I made a mistake. I should have taken two spares, I only had one," explained Latvala. "That was a mistake. I didn't think the tyre wear would be that bad, but it was warmer, the rain didn't come that looked like it would appear. So I was running out of tyres in Urunga.

"I mean... if I had of had a second spare I would have been able to push harder. On the other hand, we had a meeting in the team and basically before going out to the stage they said no competition between each other, you can only follow the other guys and what they are doing.

"We realise that it would be better for Ott to win this event because he might still have a chance to win the title if something goes wrong with Thierry or Sebastien."

When asked by Motorsport.com if that means he'll back off tomorrow, Latvala said: "That is the target, but Hayden is doing a great job. He's putting pressure on us, so we can't relax. He will hunt us."

Hyundai driver Paddon confirmed that he'll be doing just that, the Kiwi using the ongoing threat of rain as motivation that he can run down the 26s gap to the lead Yaris.

Tanak's hopes of snaring a first WRC title currently rest on winning both the rally itself and the power stage tomorrow afternoon.

However even then he'll need more assistance from Sebastien Ogier; as it stands the Frenchman is six points clear of Tanak on live points, which means he can seal the title by holding position, regardless of what happens on the power stage.

Ogier's sixth spot currently remarkably comfortable, with a 20s gap back to Elfyn Evans, who has already slowed once to let his M-Sport teammate through for road position.

Thierry Neuville is all but out of the fight down in eighth, with problems for Ogier and Tanak his best hope of snatching the title.