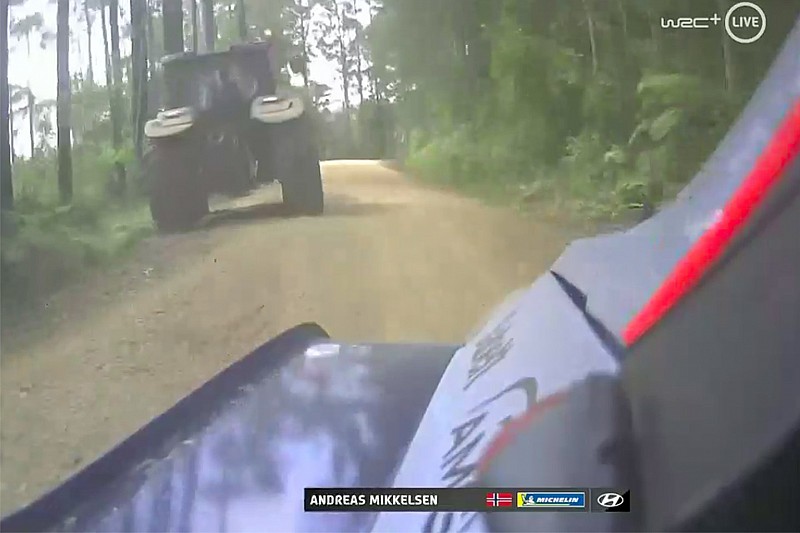 Hyundai team manager Alain Penasse has confirmed a tractor being driven down the stage was partly to blame for Andreas Mikkelsen’s Rally Australia crash.

The Norwegian’s i20 Coupe WRC slid into a ditch on a fast right-hander shortly after passing a tractor which was being driven down the road in the Sherwood test.

The tractor had been working on a chicane, pushing a straw bale back into place after Jari-Matti Latvala’s Toyota collided with the third-stage obstacle, moving the bale out of position.

Penasse told Motorsport.com: “They (Mikkelsen and co-driver Anders Jaeger) were distracted and they were talking, saying to each other: “Is the stage cancelled? Is the stage safe? What do we do?” And then one kilometre further down the road they crashed.

“For sure this distracted them.

“Maybe they should have slowed down and got their heads right and then go. But it’s clear this should not happen.

“The marshals on site decided, with three minutes [between the cars], to take the tractor into the stage, move the chicane and then come out of the stage – we are told by rally control they decide to do this themselves on the spot."

Penasse discussed the matter with the organisers, but was angry at the consequences for Mikkelsen and his team.

“We are still playing in the manufacturers’ title and now we have only two cars,” he said. “Andreas’s split time was -5.3 and this was his stage. He always performs well on this stage. OK, what can we do?”

Mikkelsen’s car suffered damage to the engine in the impact and it remains to be seen if he will return under Rally 2 regulations for the weekend’s Coffs coast action.

“The engineers have been to look at the car,” said Penasse, “the water went out, so we have to wait and see.”

Rally Australia sporting director Adrian Stafford issued the following statement: “In SS3, at 15.70 km, a chicane constructed with hay bales was struck by Car 7, resulting in the stage being partially blocked by the hay bales.

“A tractor was parked nearby - off the stage - and without authority from the organisers, the driver moved onto the stage and repositioned the hay bales.

“After the tractor driver repaired the chicane he started to move on the side of the track after the chicane just as Car 4 drove through the chicane. The tractor was partially on the road as Car 4 went past. There was no contact between Car 4 and the tractor.

“Car 4 travelled approximately 1.20km further along the stage then struck a culvert on the inside of a fast left hand bend, before stopping a short distance later with damage to the car.

“The organisers have taken control of the tractor to ensure no further intervention.”