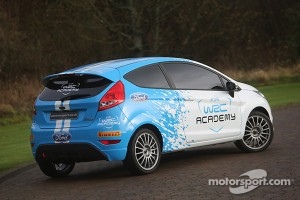 Six of the newly announced FIA WRC Academy crews completed two days of training today ahead of the season opener in Portugal. In a series of technical and administrative seminars, competitors were given a comprehensive introduction to top-level rallying from a group of key industry professionals.

Supported by Ford Racing in Europe, this year will once again see competitors compete behind the wheel of identical Ford Fiesta R2s with control tyres from Pirelli. Contesting six events over the course of the season, crews will see their best five results count towards their final Cup points.

Arriving at M-Sport HQ, prospective graduates were given an introduction to the award-winning Fiesta from M-Sport’s experienced engineers. With technical demonstrations on car maintenance and performance, competitors were taught the importance of mechanical sympathy – using the correct gear change procedure, for example, to prevent damage to the gearbox internals and ensure longevity.

M-Sport engineers also briefed competitors on how to best fine-tune their Fiesta: what adjustments can be made within the regulations – damper clicks and brake bias for instance – and how this can be used to influence the cars handling.

Driver’s and Co-drivers where then given their first challenge of the season, a tyre change competition to emphasise the difference that planning and preparation can make. This was won by Jose Suárez, before heading to Kirkbride Airfield for some on-track tuition from Pirelli test driver and four-time Italian Rally Champion, Paolo Andreucci.

With assessment and feedback on issues such as mechanical sympathy and mental approach, the WRC Academy crews were taught how to get the most out of the Fiesta by one of the world’s most experienced drivers.

Focusing on the administrative aspects of the sport, day two centred on a number of seminars from some of the sport’s most experienced individuals. WRC Academy Sporting Co-ordinator Phil Short addressed competitors on the format of each event as well as touching upon other sporting aspects such as testing, recce, Rally 2 rules and safety on event.

WRC Academy partners, Pirelli and Peltor also addressed the crews: Pirelli delegate Fabio di Claudio discussing the compounds and characteristics of the tyres available for each event and Peltor’s Patrick Andersson assessing the implications noise interference can cause for top-level rally drivers.

Focussing on the growing importance for drivers and co-drivers to deal with the media, sponsors and member of the general public, WRC-experienced PR agent Ann Bradshaw, led an informative lecture on the importance of media and presentation. Focussing on verbal communication, social media and personal appearance, crews were provided with expert guidance on how to best promote themselves over the course of the season.

Competitors were also given an introductory tutorial on the importance of fitness and psychology from Edinburgh University’s Dr Tony Turner. Dr. Turner has worked with a number of motor-sport programmes, including the Pirelli Star Driver series, and his extensive knowledge and research will see the crews well prepared for the events to come.

The intensive programme came to a close with a team building exercise focused on exemplifying the importance of teamwork and sportsmanship. This was a light hearted opportunity for competitors new and old to work together and develop the bonds that will see them collaborate in the future. With the pre-season training completed, competitors will be well prepared as they embark on the first round of the season in Portugal at the end of the month.

“It was good to meet the team and competitors. I took on board a lot of information and got a better understanding of how the [WRC] Academy will work. The discussions and activities will definitely help me in my preparation for Portugal.”

“It was really good fun to get to know the other competitors and I enjoyed the team building exercises, especially climbing the rock wall blindfolded! I am feeling very comfortable that everything is all set for Portugal.”

“I had a great day, the best thing was that it was genuinely really good fun but also informative. I have not been in the car since [Wales] Rally GB last year so it was also a great opportunity to get back behind the wheel.”

“I had a really encouraging couple of days ay M-Sport and now feel ready to plan and prepare for Portugal. It is good to see that the [WRC] Academy is on track to run very well this year.”

“I found the training days really good, useful and interesting. I got to know the team, car and competitors as well as what to expect from the [WRC] Academy and where I can improve. I am excited to compete against this year’s drivers and be a part of this series.”

“I am very happy and looking forward to Portugal where we will go flat out. I also learnt a lot from the team building exercises today."