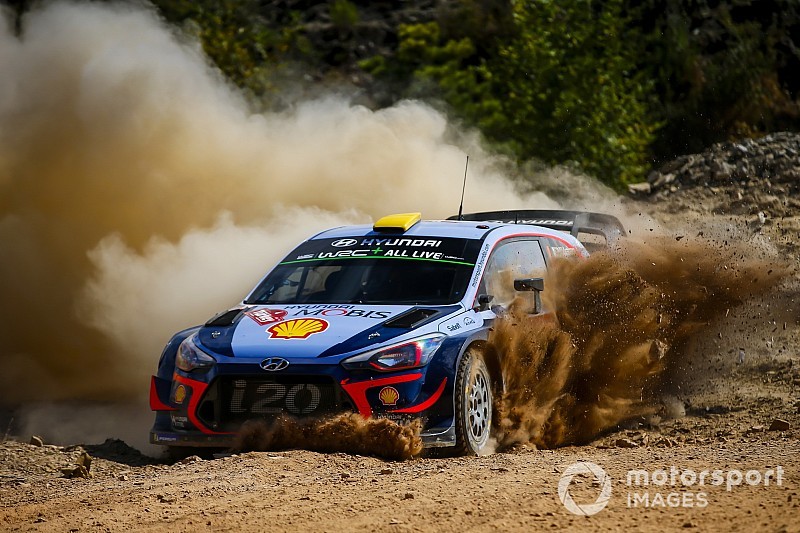 Andreas Mikkelsen moved back into the lead of Rally Turkey, with World Rally champion Sebastien Ogier down to fourth after a one-minute penalty and Thierry Neuville out.

Neuville was the first casualty of a highly dramatic morning, having to retire from the rally lead after breaking his suspension on the opening Yesilbelde stage.

Ogier won that stage by a huge 22 seconds and moved into a 25s lead over Mikkelsen, only to sustain suspension damage of his own just minutes after Neuville had given up on his attempts to repair his car on the road section and retired.

M-Sport Ford driver Ogier's broken wishbone occurred close enough to the end of the Datca stage that he only lost 18s and held on to the lead of the rally ahead of Mikkelsen.

But he had to carry out extensive work on the car after the finish in order to make it to the next stage, advised by teammate Elfyn Evans and privateer Henning Solberg.

Although Ogier managed to successfully replace the damaged parts on his Ford and reach the Icmeier stage, he picked up a one-minute penalty for checking in late.

Ogier was still fastest on the stage but is now fourth, 46.1s away from new first place man Mikkelsen.

Both Toyotas are likely to come under pressure from Ogier when the rally resumes in the afternoon, as he is 7.7s behind Latvala and 9.8s off Tanak - who is 36.3s behind leader Mikkelsen.

Hayden Paddon is an increasingly lonely fifth, with Craig Breen and Teemu Suninen up to sixth and seventh after Esapekka Lappi crashed out on Icmeier.