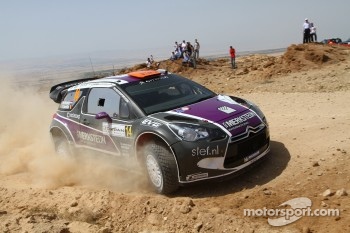 The WRC Jordan Rally came to a premature ending on Saturday morning for Peter van Merksteijn jr. The Citroën DS3 WRC came to a standstill on the third special stage after very good beginning in the morning and was the Jordanian adventure for the Van Merksteijn Motorsport driver over.

After a difficult opening day when predominantly on the morning stages time was lost, Peter van Merksteijn jr. settled down into a good rhythm and could match the times set by the other World Rally Car drivers. With the experience of yesterday, Peter jr. started very well for the final eight special stages of the shortened WRC Jordan Rally.

The opening stage of the morning was over fourteen kilometers long and with a competitive time on this stage the DS3 WRC driver from The Netherlands climbed a position in the classification. On the next stage the pace was increased even further and with a 12th position, the team proved that there is still a lot of improvement to be expected from Peter jr. with this new car and e further climb up the classification was a possibility.

Today’s longest stage of 20 kilometers would also be the last stage of this rally for Peter junior and his Belgian co-driver Eddy Chevaillier. Again the car was good on the pace with the DS3 WRC until halfway through the stage when they had to park the car at the site of the road when technical problems with the Citroën eliminated the possibility to continue the stage to the finish. Another retirement for Van Merksteijn Motorsport in the second WRC event of the team with the Citroën DS3 WRC.

“It went very good this morning and on the second stage I didn’t push it on these difficult and unpredictable special stages” according to Peter junior back into the service park at the shore of the Dead Sea.

Vettel and Webber put helmets up for auction

Hamilton was a "bit weird" as teammate, says Button