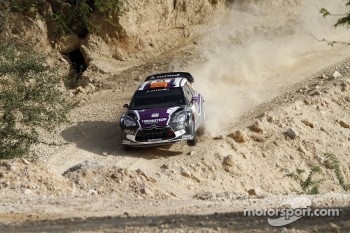 During this weekend’s WRC Rally d’Italia Sardegna, father and son Van Merksteijn will see action together with the Citroën DS3 WRC on the Italian island in the Mediterranean Sea. Peter van Merksteijn sr. will make his debut for the French make after being absent from the sport for almost one and a half year while his son Peter jr. will start with the DS3 WRC for the third time.

Van Merksteijn Motorsport will this weekend be for the first time at the start of a WRC rally in full force with two Citroën’s DS3 WRC. After his entries in Portugal and Jordan, Peter van Merksteijn jr. is supported within the team by his father who will also be driving the DS3 WRC. Despite lacking experience in the DS3 WRC by Peter sr., the battle will start again about who will be the fastest within the Van Merksteijn family to drive the special stages.

The Rally Sardegna will be the first time that Peter van Merksteijn sr. will get an experience in the new generation World Rally Car behind the wheel of Citroën DS3 WRC. Together with his co-driver Erwin Mombaerts he will be on Thursday evening at the start in Olbia for their first rally since Rally Sweden in February 2010. Even though the Rally Sardegna is a very difficult event and Peter sr. has not tested with the car, the entrepreneur from Holland is looking forward to the start of the first stage of the rally.

For peter van Merksteijn jr. it will be his third event in the 2011 WRC season in which he will start together with Eddy Chevaillier. After the premature exit during the previous round in Jordan, Peter jr. hopes to score a good result with the DS3 WRC. In preparation for this event, Peter jr. and Eddy tested last week with the car for a day in the south of France to find a good setup.

As with the previous WRC rounds in Portugal and Jordan in which the team entered, Van Merksteijn Motorsport will raise money again for a charity this weekend. Per driven stage kilometer, the team will reserve an amount for KiKa, a Dutch foundation researching childhood cancer. During the last two WRC rounds an amount of €3311.34 has been raised for KiKa.

The Rally Sardegna has the strongest entry list in 2011 so far with 20 World Rally Cars entered in the event. The rally is 1183 kilometers long and father and son Van Merksteijn will have to drive 18 special stages totaling 340 timed stage kilometers. The stages on the first day are situated in the centre of the island over 150 kilometers away from Olbia and the cars will not return to the service park during the afternoon for the regular service. On Saturday and Sunday the cars will stay in the northern part of Sardegna and on Sunday afternoon at 12 o’clock the Power Stage will start which will be broadcasted live on various television stations.