All good things come in threes

First, second, and fourth – the Volkswagen drivers put on another master class on day three of the Rally Great Britain. With only Sunday’s final leg to go, Sébastien Ogier/Julien Ingrassia (F/F) continue to lead the final round of the FIA World Rally Championship (WRC) in Wales, ahead of team-mates Jari-Matti Latvala/Miikka Anttila (FIN/FIN). Andreas Mikkelsen/Mikko Markkula (N/FIN) produced an impressive display in the third Polo R WRC to climb from sixth to fourth. The duo matched its fellow Volkswagen pairings, who secured the Manufacturers’ Championship* for the Wolfsburg-based outfit with races to spare, in every regard. With 51.92 kilometres of special stage still to come on Sunday, they remain within striking distance of the podium. 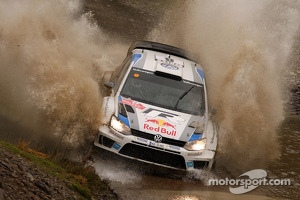 Nordic by nature – the all-important longer stages on the Saturday of the rally all went to either Norway’s Andreas Mikkelsen or Jari-Matti Latvala of Finland. Andreas Mikkelsen carried out the team’s instructions – to climb to fourth place by the end of the day – as early as the first stage “Gartheiniog”, clocking the fastest time to claim his first stage win of the rally. He immediately followed this success with another win on the longest special stage of the day, “Dyfi”. On only one stage did the young driver finish outside the top three. Jari-Matti Latvala also showed his class again on Saturday, winning a hat-trick of special stages from 12 through to 14 – “Gartheiniog” and “Dyfi” on the second loop and “Dyfnant”. Only the two spectator stages – the only asphalt stage of the day at “Chirk Castle”, which the cars also tackled twice – went to Volkswagen’s rivals, in the form of Dani Sordo (Citroën) and Thierry Neuville (Ford).

Quotes after day three of the Rally Great Britain

Jari-Matti Latvala, Volkswagen Polo R WRC #7 “Our goal for today was to push hard again and put some pressure on Séb. Unfortunately the morning’s stages did not go quite as we had hoped. On the one hand, I was lacking a little bit of confidence to go flat out from the start and find a good rhythm. Then we had also marked too many places as slippery when we did the recce prior to the rally. As a result, I hesitated a little a few times during the first loop. Things went better for us later on, and we won three special stages. However, Séb and Julien were barely slower than us and able to maintain their lead. We only have about another 50 kilometres of special stage to go on Sunday. Barring something out of the ordinary, it will no longer be possible to make up that much ground. Despite this, I will try to keep up both my pace and the pressure.”

Sébastien Ogier, Volkswagen Polo R WRC #8 “I am happy with the way we handled this long day today. It was a good clean performance without any major mistakes. Surprisingly, the grip was better on most of today’s stages than it was on Friday. For us, it was all about maintaining a steady lead over our team-mate Jari-Matti, and we did that perfectly. As such, we did not have to take too many risks and took a rather cautious approach to the many new stages. A 20-second lead is, to a certain degree, reassuring. However, we will have to stay wide awake if Jari-Matti pushes hard again tomorrow. If not, you can be out before you know it – and I definitely want to make it to the finish this time. That would be the perfect end to a perfect season.”

Andreas Mikkelsen, Volkswagen Polo R WRC #9 “An absolutely fantastic day for us. Our times were good, and two of them were good enough for stage wins, so I am more than happy – especially as we were absolutely flawless today and came through each stage cleanly. We made up a lot of time and climbed two positions. I felt great in the Polo right from the very first minute today. However, it was not easy to judge the grip levels, as there was a real mix of particularly slippery sections and some with more grip. I think we found a good rhythm to cope with that, particularly in the morning.”

Jost Capito, Volkswagen Motorsport Director “The job of Motorsport Director was undoubtedly a dream job today. Not only do we have the top two drivers on our team in Sébastien Ogier and Jari-Matti Latvala, but we also have a very quick and reliable World Rally Car with the Polo R WRC. The team proved this once again, and the two Volkswagens were able to pull further clear. However, I am particularly proud of Andreas Mikkelsen today. We told him this morning that we expected him to be fourth come the end of the day. That was certainly not an easy task. However, he pushed so hard on the first special stage of the day that he climbed into fourth there and then, before proceeding to open up a gap between him and the car in fifth. You could not have asked for more from all three of the pairings today. We are looking forward to the remaining 50 kilometres tomorrow, and want to hang onto this strong team result right through to the finish.”

... the racing driver’s natural enemy: ballast. Cars at the Rally Wales return to the Service Park at the end of the day carrying the odd kilogram more than when they set off. In the case of Sébastien Ogier, this was 28 kilograms of mud and debris that had attached itself to the wheel arches and undercarriage of his Polo R WRC.

WRC Rally New Zealand: The Good, The Bad and a new king

New Zealand finally returned to the World Rally Championship at the third time of asking and its perfect gravels roads delivered. It’s comeback will forever be etched in history as the place where the WRC crowed its new youngest ever world champion Kalle Rovanpera. Motorsport.com reviews the highs, lows, turning points, close calls and heartbreak from a memorable Rally New Zealand.

Shane van Gisbergen is keen to do more rallying but isn’t planning a career change following a remarkable run to a class podium on his World Rally Championship debut at Rally New Zealand.