The Volkswagens dominated the first leg of Rally Sweden.

Volkswagen Motorsport holds an impressive one-two-three after the first full day of competition in Rally Sweden, the second round of the FIA World Rally Championship. Reigning World Champion Sébastien Ogier heads the trio with team-mates Andreas Mikkelsen and Jari-Matti Latvala in hot pursuit. 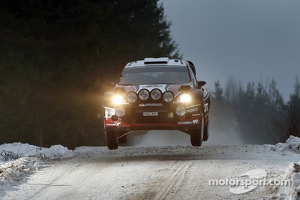 Rally Sweden officially got underway last night with the opening super special stage in Karlstad where Mikkelsen topped the time sheets. Today’s route from the service park in Hagfors took the crews to the first stage in Sweden – the new Torsby stage – before heading up to Norway for two identical loops of two stages. One more run over the Torsby stage concluded the day in which a total of 62.02 competitive kilometres was covered.

Victory in the first stage elevated Ogier into the lead this morning and the Frenchman remained under pressure throughout the day from Mikkelsen, who briefly took the lead after stage six this afternoon. Ogier ultimately won three of the day’s six stages with Mikkelsen claiming victory in two, the rivalling team-mates split by just 5.8 seconds this evening as Mikkelsen elected to drop back and save tyres for Friday.

"I am really extremely happy that we are actually leading the rally. The conditions were remarkably good, and better than we had expected. I am very happy with my own performance. It was a perfect day for us, and to have won three special stages from this starting position is a dream result. We now go into day two full of optimism," said Ogier.

Latvala has struggled in some of the slower stages, regaining time in faster sections, and briefly lost third position to Ott Tanak when the Estonian won the fifth stage. He nevertheless climbed back into third and overnights 12.2 seconds off the overall lead. 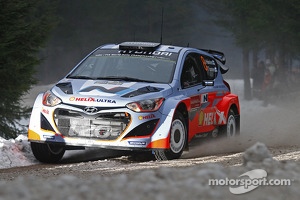 Tanak has made an impressive return to the WRC in the Fiesta RS WRC and remains in close touch with Latvala, just 2.6 seconds further adrift. Mikko Hirvonen and Mads Østberg share fifth position ahead of Thierry Neuville in the new Hyundai i20 WRC. Both he and team-mate Juho Hänninen are closely matched, with the Finn 10 seconds behind. Reigning FIA Junior WRC Champion Pontus Tidemand is an impressive ninth in a Fiesta RS WRC and Kris Meeke and Robert Kubica are 10th and 11th respectively as they build up experience on the snow.

Volkswagen drivers dominate day one of the Rally Sweden