Having completed 73.75 of the 306.53-kilometre itinerary, Jari-Matti Latvala/Miikka Anttila (FIN/FIN) are in a promising third position in the overall standings. Their team-mates Andreas Mikkelsen/Mikko Markkula (N/FIN) are not far behind in a good fifth place. However, Sébastien Ogier/Julien Ingrassia (F/F) – who put in the fastest qualifying time going into the toughest rally in the FIA World Rally Championship (WRC) – had to retire early due to a fuel pressure problem. Ogier/Ingrassia will restart the Rally Greece under the Rally 2 rule on Saturday. Their main rivals in the battle for the Drivers’ Championship – Mikko Hirvonen (Citroën) and Mads Østberg (Ford) – also lost several minutes each in the opening phase of the “Acropolis”. 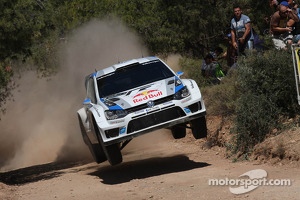 The competitors faced the longest Special Stage of the weekend (47.70 kilometres) on the very first day of rallying in Greece. The SS “Kineta–Pissia” proved a tough challenge for man and machine right from the start. Several top teams lost time as a result. Drivers had to negotiate the second stage of the day – part of the same SS – in the dark.

Quotes following day one of the Rally Greece

Jari-Matti Latvala, Volkswagen Polo R WRC #7
“We had to make do with third place today: it was a tough, eventful day and lots of teams had serious problems. Qualifying didn’t begin all that well for us, and starting in fourth position was far from ideal. The first stage didn’t go as we would have liked either. However, following a few changes to the chassis and the differential during the first service, our Polo performed much better in the night stage and we were able to gain ground and take second place. We’ve got a good starting position tomorrow and we’ll try to put the teams in front of us under pressure. But heavy-handedness doesn’t get you anywhere here in Greece – the risk of damaging the car is too high. You have to pick your fights very carefully here.”

Sébastien Ogier, Volkswagen Polo R WRC #8
“Of course it’s frustrating to have to give up after a few kilometres because of a problem with the fuel pressure. The first five rallies went perfectly for us; this is the first time this season that we have faced a bitter setback. We’ll start again tomorrow under the Rally 2 regulations with a ten-minute time penalty. That changes our strategy and approach completely, of course. We’ll do our best to get the most out of the Rally Greece and collect as many points as possible for the championship. That’s our goal.”

Andreas Mikkelsen, Volkswagen Polo R WRC #9
“It was an incredibly difficult start to the Rally Greece. In the first stage, the car felt totally different on the loose gravel to how it had during the practices because of our starting position at the front. The road was narrow and winding. The engine stalled on us on three hairpin bends. Dust got into the cockpit, which wasn’t ideal for visibility, of course. We had trouble with visibility in the dark in the second stage too and didn’t feel 100% comfortable. But all in all, the first day went better for us than it did for a number of top drivers. Fifth place overall is a very good result. As a consequence, we’ve got a better starting position for day two than we had today.”

Jost Capito, Volkswagen Motorsport Director
“Let’s start with the good news first: Jari-Matti Latvala and Andreas Mikkelsen are well in the running in the Rally Greece. With third and fifth place, they are in very strong positions going into day two – which will be even tougher than today. The bad news for us today was that Sébastien Ogier had to retire early during the very first SS due to a loss of fuel pressure. He will restart the competition on Saturday under the Rally 2 regulations, however. Even with a ten-minute penalty, I wouldn’t write Sébastien off just yet – anything could happen right up to the very last moment in this car killer of a rally.”