Volkswagen leads in Argentina – Ogier ahead of Loeb

Once again, everything came together today (Thursday) – the technology and the team, the drivers and the co-drivers, the strategy and the tyre choice. With Sébastien Ogier/Julien Ingrassia (F/F) leading the pack, Jari-Matti Latvala/Miikka Anttila (FIN/FIN) in fourth place and Andreas Mikkelsen/Mikko Markkula (N/FIN) currently ranking sixth, all three Volkswagen Polo R WRCs are among the frontrunners after the first 157.94 kilometres of the 407.64-kilometre rally. Day two of the fifth event in this season’s FIA World Rally Championship demanded everything of man and machine, with fog and light drizzle, rough gravel roads and the tricky question of which tyres to use all making for a thrilling day in Córdoba Province. 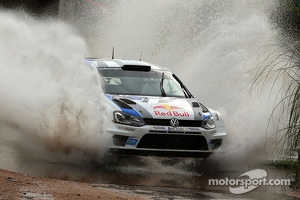 The teams had to tackle each of the two stages – “Santa Catalina/La Pampa” and “Asochinga/Agua de Oro” – twice. The Volkswagen drivers chose mainly soft Michelin tyres in the second of the two runs: a wise decision. Sébastien Ogier and his Polo R WRC have a 16.3-second lead over record-breaking world champion Sébastien Loeb (Citroën) ahead of the last two days of Rally Argentina. Ogier has secured four of a possible five best times.


Jari-Matti Latvala, Volkswagen Polo R WRC #7
“It was a day of highs and lows for us. In terms of speed, we were usually up there with the best today – like in the first and third stages. I was a bit too fast at one point in the second stage and hit a stone. I was lucky and was able to keep going, but my handbrake stopped working afterwards which is important because we use it to throw the car around hairpin bends. On top of that, the tyres were really starting to flag at the end of that stage. Once my crew had done a great job of servicing the car, everything went according to plan again, but the handbrake played up again in the fourth stage. I lost a bit of time on the hairpin bends. I could have made more of today, so I’m not 100% happy.” 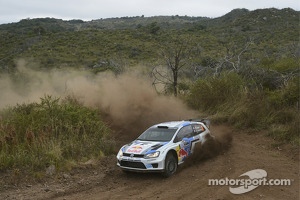 “We’re very pleased with the way the rally is going for us so far. Winning the first special stage right at the start of a day is a great feeling, of course. We were catching up Dani Sordo in the second stage, which cost us a bit of time, but that’s all part of rallying. In the afternoon, we chose four soft and two hard Michelin tyres, which was far from being the worst decision we could have made. Being in front after such a tough day is great – now we’re concentrating on the rest of the rally. After all, we’ve got several long and difficult stages ahead of us.”

Andreas Mikkelsen, Volkswagen Polo R WRC #9
“Hazy weather and fog in the morning twinned with four extremely long, physically challenging special stages – the Rally Argentina didn’t make things particularly easy for us today. High levels of humidity and soaring temperatures in the cockpit demanded absolute fitness. We worked on our communication today and tried out our new pace notes for the first time. Everything is moving in the right direction: our times are getting better and I feel more comfortable in the Polo R WRC with every metre. We’re delighted with our placing too – we’d love to keep it up over the next two days, of course.”

Jost Capito, Director of Volkswagen Motorsport
“Motorsport directors love days like today. Every member of the team helped to put us in the lead after some really difficult stages. A key part of that was translating the right weather information into the right choice of tyres this afternoon. The mechanics did a brilliant job during the lunchtime service too and sent all three Polo R WRCs back into the rally in tip-top condition. The drivers and co-drivers also put in a great performance today. In short: I’m proud of the lot of them.”

AUS: Supermoto round one summary