Saving the best for last

Volkswagen added another sporting highlight to a memorable year at the finale of the FIA World Rally Championship (WRC). The final result of the season: Ogier/Ingrassia, followed by Latvala/Anttila with Mikkelsen/Markkula fifth. The three works duos in the Polo R WRC achieved the best team result so far, winning 16 of the 22 special stages and claiming 41 of a possible 66 top-three spots. This was the final cherry on the cake for Volkswagen, at the end of a phenomenal season that surprised almost everyone. Sébastien Ogier/Julien Ingrassia (F/F) had already been crowned World Champions* in the Driver and Co-Driver competition at the Rally France. Together with team-mates Jari-Matti Latvala/Miikka Anttila (FIN/FIN), they then presented Volkswagen with the Manufacturers’ title in Spain. 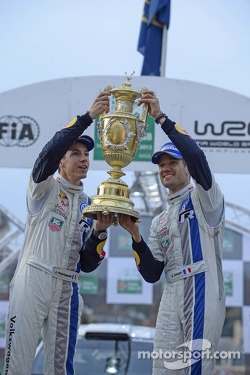 Finishing with a bang

The result at the Rally Great Britain in Wales was Volkswagen’s best since entering the World Rally Championship in January. As well as the second one-two in a row for Ogier and Latvala, Andreas Mikkelsen/Mikko Markkula (N/FIN) finished fifth in the third World Rally Car from Wolfsburg. The outstanding team result not only saw all three Polo R WRCs finish in the top five, but also included stage wins for all three works duos. Sébastien Ogier/Julien Ingrassia were unbeatable on nine stages, with Jari-Matti Latvala/Miikka Anttila triumphing five times and Andreas Mikkelsen/Mikko Markkula clocking the fastest time on two occasions. At least one of the Volkswagen drivers finished in the top three on all but one of the 22 special stages. The only exception was the Power Stage, on which World Championship points are awarded to the fastest three drivers.

The WRC season draws to a close with a classic

The Rally Great Britain puts both man and machine to the ultimate test as it winds through Wales. Only on day two of the rally was a remote midday service scheduled. On each of the remaining three days, the mechanics were only permitted to lay a hand on the World Rally Cars in the morning and after the final stage of the day in the evening. In the meantime, the drivers were faced with testing special stages through the Welsh forests, with deep water crossings and more than enough mud. As if this were not enough, ten of the 22 special stages were making their return after an absence of at least a year. Only two stages were held on asphalt – “Chirk Castle”, which the cars tackled twice on the penultimate day, and the concluding “Great Orme” stage.

Crowds turned away on Sunday

A first for the 2013 season: the sheer volume of the crowds on Saturday far exceeded any expectations, and ultimately resulted in the final stage of the day being delayed by an hour. As a result, the decision was taken not to sell any additional tickets on the Sunday of the Rally Great Britain. In this regard too, the rally was a fitting end to a successful season. In total, about 3.5 million fans flocked to the special stages in 2013. On German TV alone, an average five million viewers switched on each rally weekend to watch the action unfold. In 2012, this figure was down at around 50,000. And the final weekend of the WRC also saw Volkswagen set a new record on social networks: over the course of 2013, one million fans pressed the “Like” button on facebook.com/volkswagenmotorsport

Fairy tale with a happy ending

Sweden, Mexico, Portugal, Greece, Italy, Finland, Australia, France, Spain and now Great Britain: Volkswagen enjoyed a fairy-tale 2013 in the World Rally Championship, with victories at ten of the 13 rallies. The Wolfsburg-based outfit secured the titles in France and Spain, and went on to end the season on an absolute high courtesy of back-to-back one-twos in Spain and Great Britain. And all this after the original goal set for the 2013 season was to make it onto the podium without relying on mistakes from the opposition.

A question of concentration and efficiency: limited service possibilities in Wales

The mechanics and engineers were confronted with a particular challenge at the Rally Great Britain: over the four days, they had only seven opportunities to service the cars. Unlike at other events, the itinerary in Wales did not include a midday service on Saturday or Sunday. This made it all the more important to work efficiently, quickly and avoid any mistakes during the remaining three flexi services and the 15-minute services permitted in the mornings. The Volkswagen mechanics refused to lower their guard at the end of the season, and completed their work on the three Polo R WRCs in typically meticulous fashion.

Winter break? Only on the calendar.

The World Rally Championship officially heads into its winter break after the Rally Great Britain. The 2014 season kicks off from 14 to 19 January with the Rally Monte Carlo. For Volkswagen, however, the 59 days between now and when the World Rally Cars’ engines are fired up in competitive mode again are crammed full of preparations. Immediately after the end of the Rally Wales, the mechanics will begin work assembling the cars for the iconic “Monte”. Tests on asphalt, ice and snow are also scheduled for the drivers, engineers and mechanics. The press department also faces a marathon of PR appointments. And the entire Volkswagen team can look forward to another milestone in the team’s history on 06 December, when the International Automobile Federation (FIA) presents the trophies to the World Champions* in the Driver, Co-Driver and Manufacturer competitions at its gala evening in Paris.

Quotes after day four of the Rally Great Britain

Jari-Matti Latvala, Volkswagen Polo R WRC #7 “Second place at the final round of the season is a decent result, but I had hoped for more at my ‘second home rally’. Our pace was basically okay, but unfortunately I made too many small mistakes to put Sébastien Ogier under any real pressure. I was really hungry to win this rally for a third time in a row, but Séb produced a perfect performance. When he is in this kind of mood, he is virtually unbeatable. Looking back on my first season with Volkswagen, it has definitely been a rollercoaster ride, but I now feel right home in the Polo R WRC. It was clear from the outset that 2013 would be something of a learning year. The way the season started in Monte Carlo, Sweden and my home rally in Finland was hard to take. In contrast, however, were my long-awaited first win in Greece, a further seven podiums and winning the Manufacturers’ World Championship. On top of that, I now have the confidence that comes with starting next season with far more experience.”

Sébastien Ogier, Volkswagen Polo R WRC #8 “This is the perfect end to a perfect season. I am very happy, and extremely proud of this win, as the Rally Wales is one of the toughest on the calendar. Things have not always gone to plan here for me in recent years. We just tried to maintain the gap through to the finish today. Now that the season is over, I can look back on what has really been an incredible year. If anyone had predicted before the start of the season that Julien and I would end up with nine wins and the World Championship title to our name, we would probably have sent him straight to the team doctor. I may already have thanked the team in France, but I simply cannot say thank you often enough: the team did a fantastic job in our debut year. They made this fantastic success possible by providing me with a magnificent car.”

Andreas Mikkelsen, Volkswagen Polo R WRC #9 “All in all I am happy with the Rally Great Britain. However, I was obviously hoping for more after the good day yesterday. Having fought my way into fourth place yesterday, just 20 seconds behind Thierry Neuville, I tried to apply as much pressure from the word go today. But then the errors started to creep in and I spun twice. Fifth place is definitely not a bad result in the World Rally Championship, and one you can always be proud of. But you have to say that we missed an opportunity here, given yesterday and the way today has panned out. Still, we can take a lot of positive things from our season. I am already looking forward to 2014, when we are determined to show just what we are capable of.”

Jost Capito, Volkswagen Motorsport Director “You could hardly wish for a better end to what has been a fantastic WRC season for us. A one-two, with all three drivers in the top five – the Rally Great Britain was our most successful rally of the season. We witnessed a magnificent duel between Sébastien Ogier and Jari-Matti Latvala. And a very mature and quick Andreas Mikkelsen, who was challenging for a spot on the podium. Unfortunately it was not quite to be for him, despite showing plenty of fighting spirit. We can have high hopes for all three Volkswagen drivers in the 2014 season. I am also very proud of our entire team. Although we had less opportunities than usual to service the cars this weekend, the work was not only well-oiled, but also free from any blemish and completely beyond reproach. We did not have a single technical problem in Wales. We have not suffered one engine failure during the 2013 season, nor have we lost a single chassis as a result of a crash. That is extraordinary.”

... a very special bottle of wine, enjoyed by Sébastien Ogier and M-Sport boss Malcolm Wilson. Before Ogier signed for Volkswagen, he completed a test for Ford, during which he was wined and dined by Wilson. When he then signed for Volkswagen, Wilson commented that Ogier had been able to negotiate better conditions thanks to him, and that he owed him a nice bottle of wine. Two years later, Ogier settled his “debt” before the start of the Rally Great Britain – as the newly-crowned World Champion.