Volkswagen third, fifth and seventh on Friday in France

A real thriller: with one eye on the battle for the Manufacturers’ title in the FIA World Rally Championship, the Volkswagen drivers paced themselves intelligently over the first third of the Rally France. Three different manufacturers – Ford, Citroën and Volkswagen – are represented in the top ten of the overall classification, and three different pairings have so far led the rally. Unpredictable weather was the main feature of the day after Volkswagen duo Sébastien Ogier/Julien Ingrassia were crowned the new World Rally Champions(*). Jari-Matti Latvala/Miikka Anttila (FIN/FIN), in the number 7 Polo R WRC, ended the first 120.63 of 312.14 kilometres against the clock in third place overall. Ogier/Ingrassia, who were first out on a sometimes damp route, are currently fifth in the number 8 car. Should the rally finish this way on Sunday, Volkswagen would extend its lead in the Manufacturers’ Championship. This is thanks also to the efforts of Andreas Mikkelsen/Paul Nagle (N/IRL) who, despite struggling at times today, are still well positioned in seventh place. 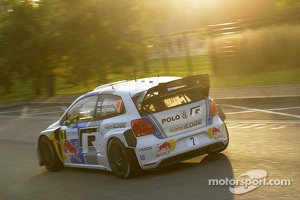 The showers that fell on the special stages, each of which were run twice, and a surface that was damp in places but dry in others, made tyre selection difficult for the teams. Volkswagen opted for hard Michelin tyres on the first loop, but switched to a mixture of the harder and softer compound for the second run. The best decision on both occasions was made by Thierry Neuville (Ford), who leads the rally ahead of Daniel Sordo (Citroën) after day two.

(*) Subject to the official publication of the results by the FIA.

Quotes after day two of the Rally France

Jari-Matti Latvala, Volkswagen Polo R WRC #7
“We can be very satisfied with third place so far. We are fast enough to keep pace with the front-runners without taking too many risks. Our Polo felt very good right from the first stage and we have concentrated on finding a good rhythm. We definitely have room for improvement, but it is important for us to play it relatively safe and stick to our goal of scoring valuable points for the Manufacturers’ Championship. It would obviously also be nice to really push hard here – but I have never won the Manufacturers’ Championship with any team, and this potential second title would be a great reward for the entire team.”

Sébastien Ogier, Volkswagen Polo R WRC #8
“To be honest, I had difficulty making sure I was completely switched on for this morning’s stages. On the one hand, I did not really sleep very well, as there was still so much going on in my head after such an amazing day. And I also took it rather cautiously, as I did not under any circumstances want to go flying off the road on my first day as World Champion. This afternoon was much better, but unfortunately we did not get the tyre selection quite right. However, that is no excuse and certainly is not intended to detract from the performance of the opposition. Thierry in particular produced a very impressive display. Respect!”

Andreas Mikkelsen, Volkswagen Polo R WRC #9
“A difficult day for us. Given today’s changing conditions, there were definitely better starting positions than ours. The day got off to a really good start in the dry, but then it began to rain heavily in the final few kilometres of the day’s second stage. I lost twelve seconds on that final sector alone – and there was nothing I could do about it. The third special stage alternated between dry and wet, making it difficult for me to judge the grip level, so I erred on the side of caution. When it comes down to it, every kilometre of experience is important for me at my first asphalt rally in the Polo R WRC. The tyre selection was not the best: we were underway on hard tyres when soft would have been better – and then on softs when the harder tyres would have been the better choice. Despite this, I am happy with our performance.”

Jost Capito, Volkswagen Motorsport Director
“The Rally France is proving to be as exciting as hoped. This is primarily because Thierry Neuville in the Ford, Dani Sordo in the Citroën and Jari-Matti Latvala in the Polo R WRC have put on an impressive display in difficult conditions. They have beaten the old and new World Champions in a head-to-head battle. However, there is still a long way to go at the Rally France, and it is still anybody’s to win. The weather could also spring a few surprises tomorrow and blow the competition wide open again. I can only recommend any motorsport fans to watch the rally live, otherwise you will really be missing out on something.”