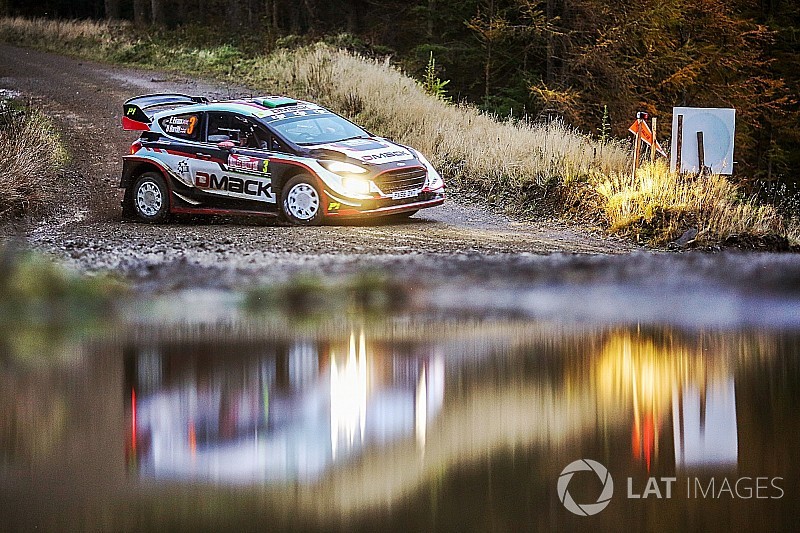 Elfyn Evans maintained his Rally GB lead as fog shook up the rest of the leaderboard on the Saturday night stages.

Sebastien Ogier was one of those to gain most, moving up to second place and closer to clinching the 2017 World Rally Championship this weekend - despite going off the road and picking up a puncture and brake damage.

The whole field struggled badly for visibility as fog moved in on the Aberhirnant stage that began the evening loop.

Evans was among those to drop time, going only seventh quickest on the stage, but he emerged with a slightly larger overall lead as his closest pursuers fared even worse.

Ogier went off and picked up a right-front puncture but still came through fourth-fastest and 20s quicker than both his championship rivals.

He then had to effect makeshift repairs on the road section that followed, and had to tackle the following Dyfnant stage - where the fog was far less severe - with only three working brakes.

Yet that didn't prevent Ogier from going fifth quickest and dropping just 2.5s to Neuville, an outcome the championship leader described as "a miracle".

Ogier will start Sunday 53.1s behind Evans, the Dyfnant pacesetter, in second and half a second ahead of Neuville.

Andreas Mikkelsen had gained fifth from Jari-Matti Latvala prior to the night stages when the officials cancelled a jump-start penalty he had been awarded in the morning.

But he handed the place straight back again on Aberhirnant as Latvala decided the fog was an opportunity to charge and make up for his Toyota's deficiencies in normal conditions.

The result was a stage win for Latvala, and he outpaced Mikkelsen again on Dyfnant to establish a 5.9s gap going into the final day.

Tanak's poor pace in the fog means he is a further 2.5s back in sixth, with Kris Meeke another 21.5s behind.

Hayden Paddon was the other star of the foggy stage, only narrowly missing out on the fastest time to Latvala.

It didn't move Paddon up from what has become a lonely eighth, though.

His Hyundai teammate Dani Sordo lost time all evening, for reasons he declined to explain at the stage ends, and is now a distant 10th behind Esapekka Lappi's Toyota.

The other Toyota of Juho Hanninen retired from 10th in embarrassing fashion with a crash on the afternoon's short Cholmondeley Castle spectator stage.

That marks the end of Hanninen's competitive career with Toyota, as it will only field Latvala and Lappi in Australia and has dropped him for Tanak next season.