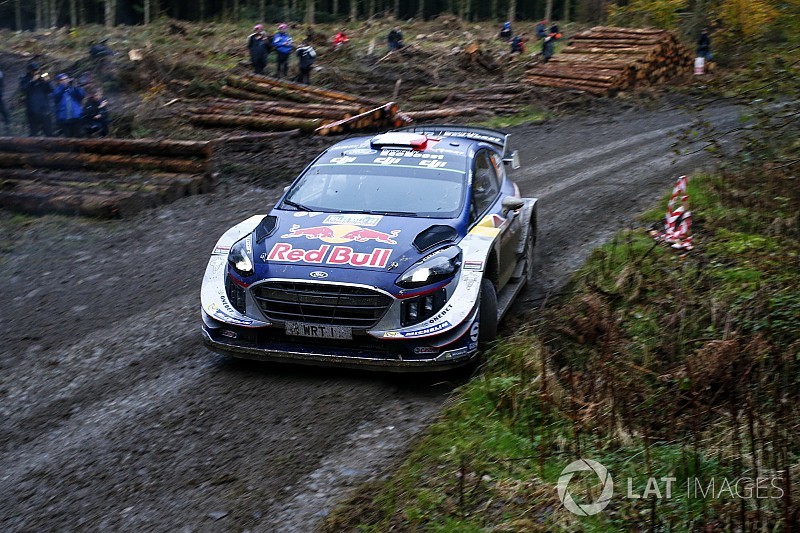 Sebastien Ogier leads Rally GB after the short Tir Prince stage that kicked off the event on which he could become World Rally champion for a fifth straight year.

M-Sport Ford driver Ogier leads teammate Ott Tanak by 37 points and Hyundai's Thierry Neuville by 38, with only 30 available after this weekend.

Neuville - who appeared angry at the end of the stage and declined to speak to reporters - and Tanak completed an initial top four covered by 0.6s.

Hyundai's recent recruit Andreas Mikkelsen and DMACK Ford driver Elfyn Evans - tipped by Ogier as favourite for victory in Wales - shared the stage lead for a long spell before being shuffled back to joint fifth.

Seventh and ninth places are also shared, between Esapekka Lappi and Dani Sordo, and Craig Breen and Juho Hanninen respectively.

Kris Meeke's Citroen stalled when he put the handbrake on and ended up 2.5s off the pace and among the leading WRC2 cars.

Mads Ostberg was slowest of the regular frontrunners, and concerned that he might have misinterpreted the layout of cones at one point on the stage and taken an incorrect route.

Hyundai is fielding a four car line-up for the only time this season in Wales, with Hayden Paddon back in the entry after skipping Catalunya to make way for Mikkelsen and Sordo making his final appearance of 2017 before sitting out next month's Australia finale.

Paddon began his return to competitive WRC action with the 11th-fastest time.