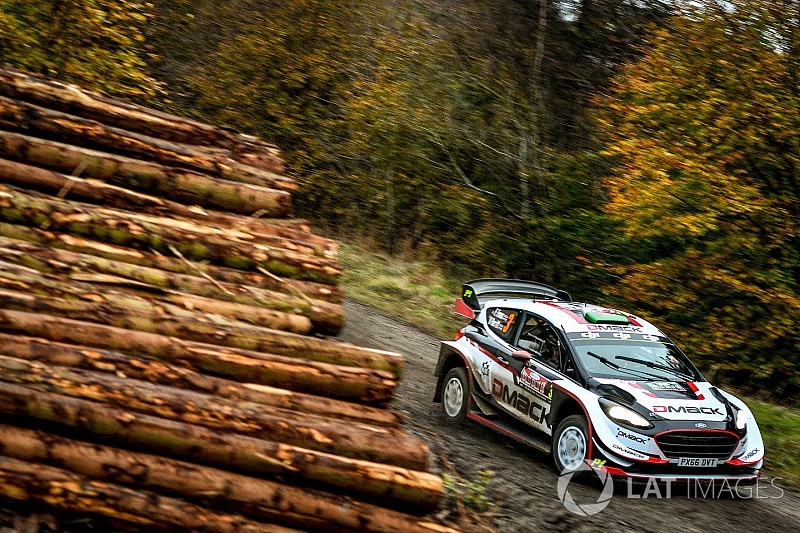 Elfyn Evans leads the Wales Rally GB round of the WRC after setting the pace on Friday morning's opening loop.

Fifth after Thursday evening's opening Super Special, Evans flew to the fastest time on two of the morning's three stages - the longer Myherin and Hafren tests - in his DMACK-shod machinery to build a lead of 6.7s over fellow Ford driver Ott Tanak.

Tanak had nibbled away at M-Sport teammate Evans' advantage on the short Sweet Lamb test preceding Hafren, but Evans was in a different league on the 21.83-mile run and went four seconds quicker than anyone else.

Evans is the first Brit to lead Wales Rally GB since Colin McRae in 2001.

Meeke was critical of Citroen's preparations for the event on Thursday after a difficult shakedown test, but was second on Friday morning's first stage and leapt up the order after starting the day 16th.

The fourth-fastest time on SS4 then moved Meeke up to third in the order at the expense of overnight leader Sebastien Ogier.

Ogier, who is looking for a fifth successive win at the event and can clinch a fifth-straight WRC title this weekend, was second on the leaderboard until the final Hafren stage of the loop.

The Frenchman forfeited more than 10s to teammate Tanak and a full 14.2s to Evans and, after admitting at the stage end he was "not daring enough", is 0.4s shy of Meeke overall.

Jari-Matti Latvala was one of a number of drivers to complain about oversteer in his Toyota Yaris but sits fifth and within striking range of Ogier and Meeke, while Andreas Mikkelsen is the leading Hyundai contender in sixth.

The Norwegian had a quiet morning in his i20 but steered clear of trouble, and is two seconds ahead of teammate Thierry Neuville.

A 10-second penalty overnight was far from the best start for Neuville, who retains a slim shot at the title, but the Belgian was encouraged by his pace by the end of the morning after a change to his diff mapping before SS4.

Dani Sordo and Hayden Paddon completed a Hyundai 6-7-8-9 in the order, ahead of the second Toyota of Juho Hanninen.

The second Citroen of Craig Breen had been sixth overall before the final stage of the loop, but suffered a slow puncture on Hafren and is now 13th, ahead of leading WRC2 runner and class champion Pontus Tidemand in his Skoda Fabia R5.