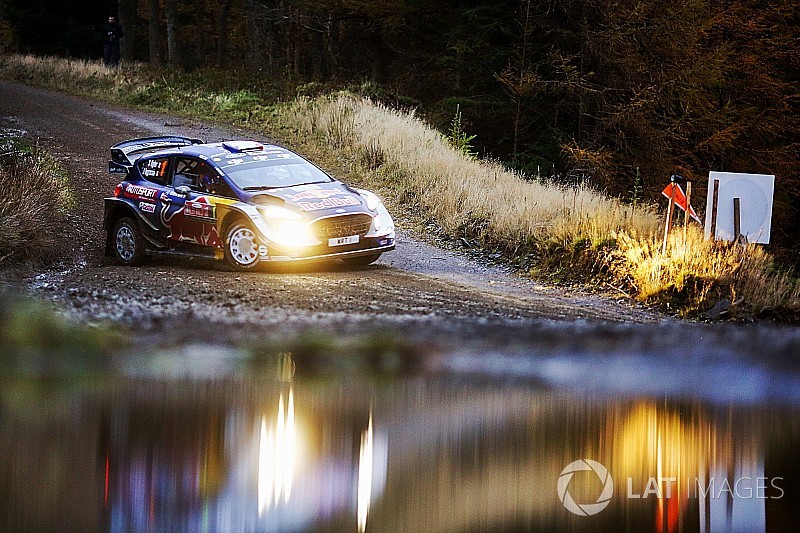 Sebastien Ogier has sealed a fifth WRC title after finishing third in Wales Rally GB, as Elfyn Evans converted his lead into a maiden top-level victory.

M-Sport driver Ogier and his main rival Thierry Neuville started the day in second and third respectively, but the Belgian edged ahead in the first stage of the day.

However, with the pair not changing positions for the rest of the day, Hyundai's Neuville had to top the Power Stage with Ogier not scoring any extra points just to keep himself in title contention.

But Ogier completed the final 6.43km test in fourth, and the two bonus points were enough to secure his fifth WRC title, despite Neuville setting the pace in the Power Stage.

In front of Neuville and Ogier, after winning nine stages across Friday and Saturday, Evans started Sunday with a 53s advantage.

Evans did not top any of the five stages on the final day but was never far off the pace, and went on to comfortably secure the first Rally GB victory for a British driver since Richard Burns in 2000.

It also marks the first WRC victory for his team DMACK.

Neuville and Ogier were closely followed by Jari-Matti Latvala, Andreas Mikkelsen and Ott Tanak, the trio taking turns in topping the first three stages of the day.

Mikkelsen then passed Latvala by also topping the penultimate stage, and held on to fourth to score his first points with Hyundai.

Latvala (Toyota) and Tanak (M-Sport) were fifth and sixth, only further 0.5s and 12.5s behind.

The rest of the top 10 remained unchanged, as Kris Meeke, Hayden Paddon, Esapekka Lappi and Dani Sordo rounded out the scorers.