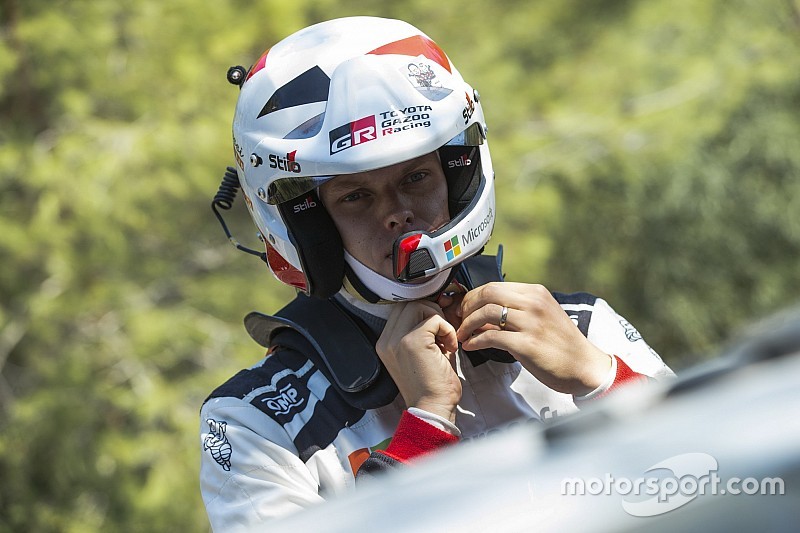 Tanak became disoriented while braking for a tight and tricky right-hander because of the wiper issue.

The corner is well known to drivers who regularly rally in the Clocaenog forest, where the shakedown test is situated, and heavy rain in the build-up to the event made the road extremely slippy.

The car crashed front-first into a bank with its rear wheels suspended, and spectators had to jump up and down on the rear to give the car traction to escape the small ditch on the outside of the corner.

Tanak was able to complete the 30-minute drive back to Deeside, where Toyota issued repairs and the Estonian was able to head back out to do more shakedown runs.

"I had some electrical issue with the wipers, there was something before the corner and I tried to get them in the position so I could see out of the screen again," said Tanak.

"When I looked out the corner was already there and I was much too quick, I should have been concentrating on the main job.

"There was a small hole in the top corner of the radiator which was leaking water. I was able to fix it and get back to service. We lost a couple of hours."

The Estonian – who confirmed the car was "OK" after his later shakedown runs – is on a run of three straight rally wins and sits 13 points behind series leader Thierry Neuville and 10 points ahead of reigning champion Sebastien Ogier.

Teemu Suninen had been fastest in tge shakedown for most of the session as drivers struggled to improve on their first couple of runs, the road churning up in places making the going even more slippy.

Toyota's Jari-Matti Latvala headed a three-way tie – as he set his time first – ahead of Suninen's M-Sport Ford teammates Elfyn Evans and Ogier in that order. Ogier bucked the trend by going fastest on his fourth run of the stage.

Of the title contenders, Ogier was highest in the order, with Thierry Neuville in sixth and Tanak in 11th after his late runs.

How Rally GB won over the WRC title contenders