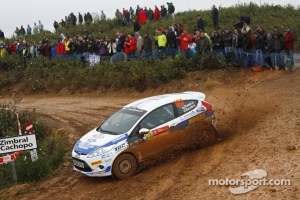 One of 10 of the sport’s most promising young talents competing in identical Ford Fiesta R2s using Pirelli control tyres, Fisher holds an advantage of 59.4s over Australian Brendan Reeves after going fastest on two of the three stages that survived the treacherous conditions.

“This has been my most adventurous day’s rallying,” said the 23-year-old British driver, who started day two in third position, 1.9s off the lead. “We were really pleased with our stage times in the tricky conditions and it has all been good experience. We have a good lead but we still have to concentrate. We were in this situation last year so we need to keep our heads down.”

Second-placed Australian Reeves said: “The stages were tremendously slippery and the fog was crazy! The grip was really inconsistent.”

It proved a troubled second day for overnight Fredik Ahlin, however, when the Swede hit trouble on stage six. “We were just a little bit too quick into a second gear left hand corner,” he said. “I thought it would be okay, but we lightly touched the bank on the outside. We damaged the driveshaft and wishbone so we had to stop.”

Behind eighth-placed Joao Silva, Elfyn Evans is ninth after a tough second stage when he went off on a downhill section and got stuck.

“The car skidded like it was on ice,” said Briton Evans. “There was a drop off the end of the road and we got stuck with the wheels only a foot off the road. We couldn’t manage to get the wheels back on the road even with 15 spectators. We had to drive the car down a bank and build a bridge to get back, which took 14 minutes. We still made it back but obviously are way behind now.”

John MacCrone restarted under Rally 2 rules and is 10th overnight.