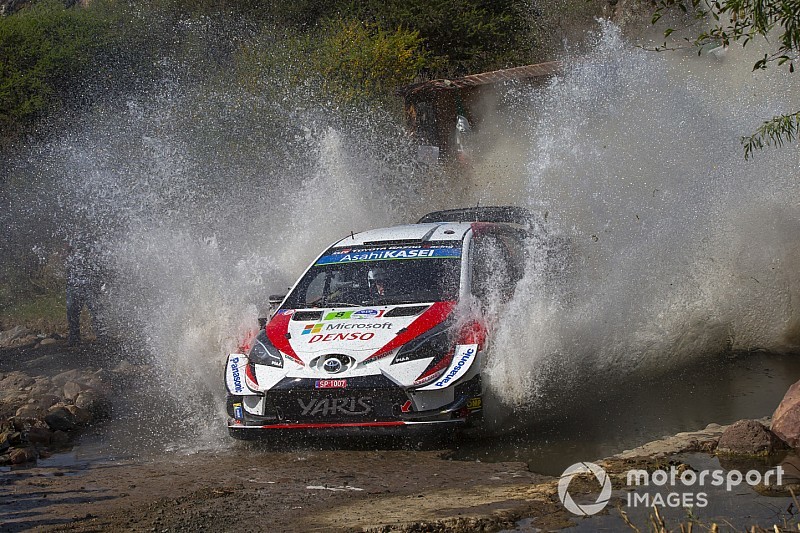 Hyundai team-leader Neuville initially increased his lead to 13.8s but was subsequently reeled in by Tanak on the two middle stages of the loop. Both drivers felt their pace was good but Neuville pointed to a potential car advantage for Tanak, suggesting the fast and flowing gravel roads of Mataderos – Cuchilla Nevada and Cuchilla Nevada – Characato suited the Toyota Yaris WRC perfectly.

The pair are separated by 6.4s after the morning loop of stages and are now on their own in the lead battle, with Andreas Mikkelsen unexpectedly promoted to third place amid issues for Ogier and Meeke.

Cuchilla Nevada – Characato, the longest stage of the rally at 20.9 miles, caught out several drivers, including Ogier and Meeke. Ogier was caught unaware by a small fork in the road, initially hesitating and then taking the left fork through a gate, while everyone else had taken the shorter right lane. He hit a gatepost on the way out and broke his Citroen C3’s power steering, costing him over a minute as he battled to finish the rest of the loop and dropping to sixth.

Meeke, who had briefly led on Friday, had initially taken third place from Ogier but was also in trouble, his brakes fading and sending him wide into a rock entering a watersplash. Though he swapped tyres around on his Yaris, Meeke still had to carry a punctured left rear through the loop-ending superspecial, costing the Northern Irishman over a half a minute across both SS11 and SS12.

Meeke was able to cling on to fourth place but has Hyundai’s third i20 WRC of Dani Sordo right behind him, only 0.9s in arrears.

Reigning champion Ogier is now 9.3s off fifth-placed Sordo ahead of him but has Jari-Matti Latvala only 11.7s behind, who was lucky to avoid the same fate as Meeke on Cuchilla Nevada – Characato.

Both the Finn and third-placed Mikkelsen went wide at the same corner where Meeke had hit a rock and, though in the case of Latvala he too sustained a puncture. Latvala had been ninth at the end of Friday’s stages after being erroneously shown a red flag by a marshal but was handed time back by officials, promoting him up one place.

M-Sport only has a single car left in the running with Teemu Suninen in eighth place, as Elfyn Evans oversteered through a fast-right hander and went nose-first into a boulder. Evans and co-driver Scott Martin sustained a heavy impact to their Fiesta WRC, which ripped the sump guard off the floor of the car.

Both were unhurt in the crash and set to work with roadside repairs, hoping to drive back to service rather than wait for a pick-up, in an effort to give M-Sport mechanics more time to fix the stricken Fiesta.

The final stage of the Saturday morning loop, a re-run of yesterday’s Parque Tematico superspecial, was delayed due to an accident on the earlier Tanti – Mataderos test.